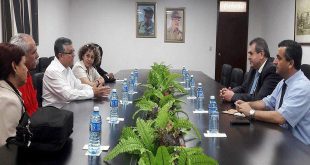 Damascus, SANA – Minister of Higher Education Mohammad Amer al-Mardini directed the parties concerned to employ all available capabilities to accommodate the largest number of Damascus University students at the dormitory.

During a tour in which the Minister inspected a number of units of the dormitory on Sunday, he affirmed the Ministry’s unlimited support to students and its efforts to secure residence for them, particularly under the current difficult circumstances where many families were forced to leave their home areas and move to others due to the terrorist war waged against the country.

Al-Mardini noted that the cost of students’ admission to the dormitory is quite affordable as it does not exceed SYP 300.

For his part, Director of Damascus University’s dormitory Ibrahim Jomaa said the plan for the current year is to accommodate 25 thousands students in 26 housing units in Mezzeh, Barzeh and al-Tabbaleh in Damascus. Cambridge , SANA – The protective link between peer play and mental health persists even …