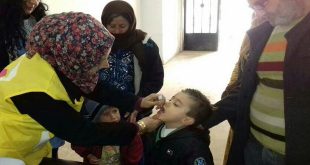 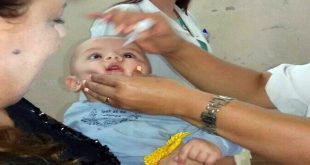 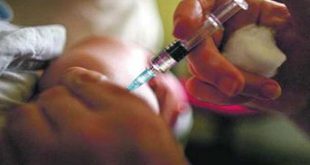 Damascus, SANA – The ninth nationwide vaccination campaign was launched on Sunday by the Ministry of Health to immunize children under five against polio.

The campaign, which was launched in cooperation with the World Health Organization (WHO) and the United Nations Children’s Fund (UNICEF) and runs through Thursday, targets around 3 million children.

Vaccines will be given to children at the health centers and makeshift shelters, which host displaced families, all across the provinces.

Minister of Health Nizar Yazigi toured two makeshift centers in Qudssaya suburb in Damascus Countryside province, accompanied by Governor Hussein Makhlouf, to find out how the campaign is running on its first day.

“The Ministry already had all the technical and logistical preparations completed so as for the campaign to access all under-five children regardless of previous vaccination status,” said Yazigi.

He stressed that approximately 3.5 million doses of polio vaccine had been distributed to health centers and shelters as well as to mobile teams, who are to make trips and ensure that all targeted children are covered through the campaign, “particularly in most needy areas.”

Up to a thousand well-experienced health workers have been mobilized, along with 830 cars for mobile teams, the Minister noted.

Although the WHO recommends the administration of 6 main vaccines within national vaccination programs in light of expensive costs, Syria’s immunization program, however, includes 11 vaccines, said Minister Yazigi.

He confirmed that all vaccines are offered to children free of charge and affirmed that the Ministry imports vaccines from the best companies in the world and subjects them to strict quality control terms.

WHO expert Samira Mohammad Othman stressed the need that all children are given polio vaccines.

Director of Health Care Department at the Ministry Ahmad al-Abboud pointed out that this campaign is being carried out in the framework of the second phase of additional vaccination campaigns.

Six campaigns were carried out within the first phase, said al-Abboud, adding that there are four more campaigns to come as part of the second phase, the last of those is scheduled between November 23 and 27.

The aim of those intensively held vaccination campaigns, which started last December after polio cases were detected in Deir Ezzor, Damascus Countryside and Aleppo and proved efficient since then, is to completely eradicate polio virus in Syria.