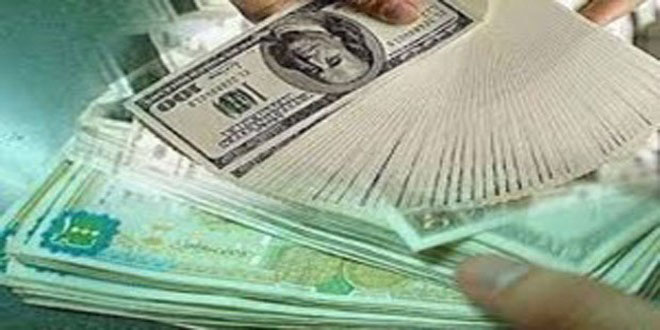 Damascus, SANA-The Central Bank of Syria (CBS) said that the sudden rise in the USD exchange rate against the SYP is due to the increased demand for foreign exchange in the northern areas as terrorists have fled along with their families towards the Turkish borders fleeing from the Syrian Army’s strikes targeting these areas and carrying with them large amounts of foreign exchange.

CBS said in a statement SANA received a copy that every terrorist’s family needs nearly 10000 USD to cross the Turkish borders and reach Europe. As a result of this, Part of this rise in demand moved to Damascus which is the main center for CBS intervention and for availability of foreign exchange supply, which consequently contributed to raising the exchange rate significantly.

CBS assured citizens by saying that the exchange rate will be back to acceptable levels with the continued rapid victories of the Syrian Arab Army in the northern areas and controlling the northern borders which will prevent the flow of more foreign exchange outside the country.