President Rohani affirms support to Syria in the war against terrorism 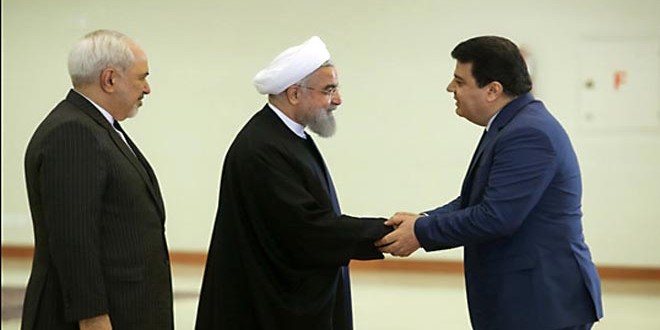 Tehran, SANA- Iranian President Hassan Rouhani said on Wednesday that if countries don’t seriously confront terrorism, it will move to other regions in Asia, Europe, Africa and other areas in the world.

President Rouhani, meeting ambassadors accredited in Tehran on the anniversary of victory of the Islamic revolution, said that the countries which try to use terrorists to achieve their objectives and policies in the region are committing a big mistake.

He called for putting an end to acts of killing and violence perpetrated by terrorist organizations and to stop the looting and smuggling of oil by terrorists to other countries, affirming that Iran is ready to combat terrorism and to cooperate with all countries to deepen the economic ties and to provide humanitarian aid to the countries and peoples that suffer from the crimes of terrorists.

For his part, Adnan Mahmoud, Syria’s Ambassador in Tehran conveyed congratulations of President Bashar al-Assad to President Rouhani on this national occasion.

President Rouhani, affirmed Iran’s continued support to Syria in the war against terrorism.