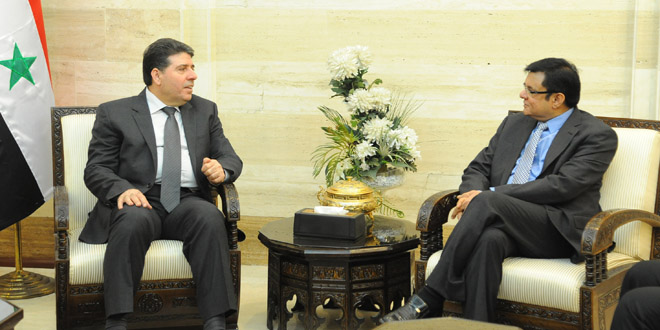 Al-Halaqi said the Syrian government wants to expand trade exchange with India as to alleviate the impact of the economic embargo and war imposed on Syria, underlining the possibility of establishing joint investment projects and encouraging Indian companies to take part in the reconstruction stage in Syria.

He also stressed the need to build upon existing agreements between the two countries and sign new ones, as well as revitalizing the role of the Syrian-Indian Business Council.

The Prime Minister lauded the role of the BRICS states in supporting causes in the region and their support for Syria.

For his part, Bhanot asserted his government’s keenness on developing economic relations with Syria, voicing appreciation for Syria’s efforts in combating terrorism and expressing confidence that Syria will defeat terrorism and rebuild what was destroyed.

He said that India believes that the solution in Syria can only be one led by Syrian people without foreign interference, and that his country will remain committed to that position.