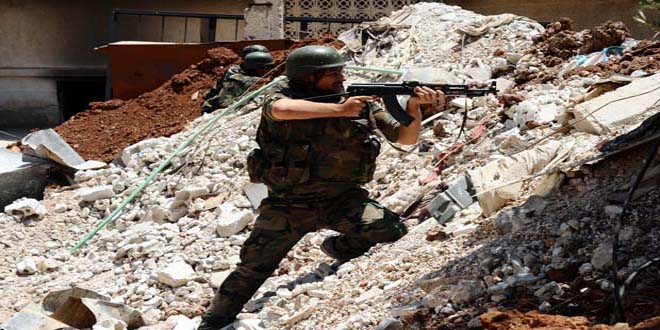 An army unit conducted precise strikes against dens of terrorist organization of Jabhat al-Nusra and affiliated Takfiri terrorists in the southern province of Daraa.

A military source told SANA Monday that the strikes, against dens in the two neighborhoods of Mahata and al-Balad, resulted in heavy losses upon terrorists in personnel and destroying a number of their vehicles, some armored with heavy machineguns.

The Syrian Arab Army’s Air Force destroyed dens and gatherings of Jaish al -Fateh and the Islamic State in Iraq and Syria (ISIS) in the countryside of Hama and Idleb provicnes.

In the eastern countryside of Hama, the Syrian Air Force’s airstrikes destroyed ISIS gatherings and vehicles to the northeast of Athraya, Jana al-Ilbawi, Rasm al-Tina, Rasm Amon, al-Rahraha and Tanahij.

In Idleb, the airstrikes targeted gatherings of Jaish al-Fatah in Khan Sheikhon city south of Idleb city, killing many of its members and destroying their munitions and weaponry.

Later on the day, army units targeted and destroyed terrorists’ hideouts in Sanjar and Sheikh Barakeh, killing 17 terrorists and destroying two pick-up trucks along with the terrorists riding in them.

Terrorist organizations acknowledged on their social networking pages that a number of their members were killed, including Abass al-Turkstani, Mohamed Ahmad Dibo Khatab, Abid Mohamed Hasido, and a Saudi terrorist known as Abu Osama al-Jazrawi.