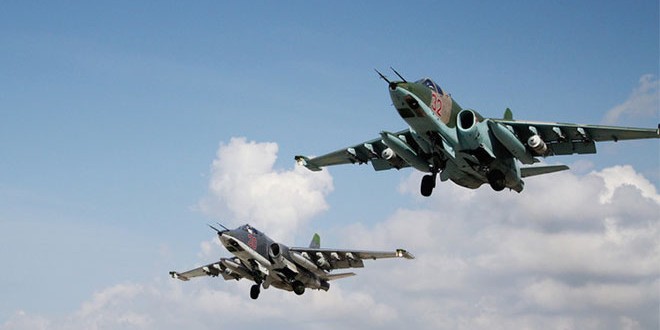 A military source said the sorties resulted in destroying of 24 command centers for terrorists, 3 workshops for manufacturing explosive devices and rockets, 21 ammo and fuel depots, 233 fortified positions, bases, and camps.

The source went on to say that in the past 24 hours, 59 sorties targeting 94 terrorist targets were carried out, resulting in destroying 8 command centers for terrorists, 5 ammo depots, 3 convoys of vehicles loaded with weapons and munitions, 6 artillery positions, 38 training camps and bases, and 43 fortified sites.

According to the source, the airstrikes aim to cut off terrorists’ supply lines and destroy their weapons and munitions depots, adding that reconnaissance confirms that terrorists are refusing to carry out their leaders’ orders to head into military operations areas as their morale has deteriorated greatly due to the concentrated airstrikes and the massive losses their suffered.

Intelligence reports indicate that terrorist organizations in several areas are in a state of panic and fear due to the airstrikes, and that hundreds of them have fled, leaving their weapons and munitions behind.