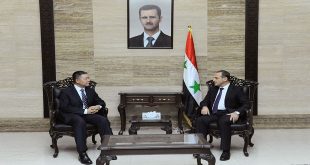 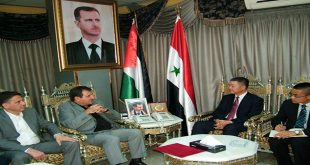 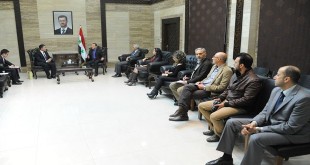 Damascus, SANA – Internal Trade and Consumer Protection Minister Hassan Safiya affirmed on Tuesday the importance of enhancing economic and trade cooperation with China and activating the role of businessmen of both countries to that end.

Minister Safiya referred during a meeting he held with China’s Ambassador in Damascus Wang Kejian on Tuesday to the huge economic burdens the Syrian government bears to secure the basic needs of the citizens under the unfair internationally-devised war waged against the country and the economic sanctions imposed on it.

Safiya highlighted the important role which the friendly countries to Syria, particularly China, could play in the efforts to provide the goods and commodities needed in the Syrian markets so as to meet the citizens’ needs.

For his part, the Chinese Ambassador stressed the growing willingness on the Chinese businessmen’ part to increase investment in Syria.