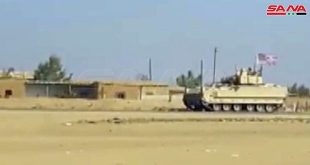 Local sources told SANA reporter that the US occupation forces and groups of QSD have besieged on Friday the area between al-Soor village and al-Bseira city and raided the citizens’ houses there, searching them and detaining a number of citizens.

The sources pointed out that heavily-armed groups of the US occupation forces and QSD prevented the citizens from entering or exiting their houses and neighborhoods at gunpoint until they finished their raids.