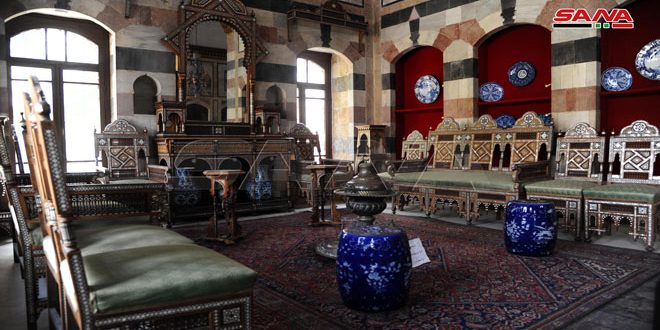 Damascus, SANA_ The Azm Archaeological Palace, which is one of the most important historical structures in the old quarter of Damascus, is yet to restore its role in cultural life, notably affected by the Coronavirus measures.

The Palace will host a concert by Orpheus Orchestra next Monday, within the activities of “Culture in Your Home”.

Occupying an area of more than 5500 square meters, the Azm Palace is a unique example of Islamic architecture and that made it center of many activities and events.

“This building, located between the Umayyad Mosque in the north and Medhat Pasha market (Straight Street) in the south, is one of the most important historical residences in the old quarter of Damascus, and one of the most extravagant and typical examples of traditional domestic architecture in Damascus.

It was built on the site of the ruins of Muawiyah’s Palace and some shops in the area.

The building stones were brought from several places such as present-day Marje Square and Kiwan land.

The construction of the Azm palace required about two years and over 800 builders and craftsmen for completion.

The palace is divided into three parts: the “haramlek” (a word of Turkish origin which mean’s the women’s section) where the family and the female guests of the women of the house stayed.

The “salamlek” which roughly means the greeting section where male guests who are not family members and people calling on business were received.

The “khadamlek” which means the servants’ section.

Arranged around a courtyard are reception halls, rooms and a large Ewan (open space overlooking the courtyard) with a long pond of water similar to that of al-Arif Paradise in the al-Hamra Palace in Granada.

External walls of rooms and halls are decorated with colored stones covered with ornaments, as elaborately painted wooden panels decorated the interior walls and ceilings of the reception halls and rooms.

Since 1954, the Directorate-General of Antiquities and Museums has worked to transform the palace into a museum of folk traditions, collecting exhibition items either as gifts or through direct buying from various Syrian regions, thus turning the palace into a tourist attraction center, visited daily by more than four thousand people.

In the rooms and halls of the palace, we find a wide variety of Damascene and traditional artifacts and collections that tell a popular story about daily life in the Damascene house.

We can also see, within the reception halls, an exhibition of handmade glass-making by blowing technique, straw-made dishes and wood carpentry with models of damask wood furniture, inlaid in mother-of-pearl, ivory and copper.

In the other parts of the palace, there is one for making copper dishes and another for women and men textiles.

It also includes a hall for a scene that represents daily life activities of Damascene women, in which you find a statue -figure of a woman sitting in front of a coffee pot placed on a copper grill, sipping her coffee in front of two other women figures playing barjis game.

A big room in the palace was used as a popular café, with a shadow puppet theater, a musical takht (ensemble), a world box play toy, and two people playing the Mancalaboard gam.

The rooms of the Azm palace contain representative models of weapons used in the past, some of which date back to the Middle Ages, as well as models of shields, helmets, spears, Damascene swords and their sheaths.

Azem Palace masterpiece Unique 2020-06-05
ghossoun
Share
Previous WHO: COVID19 may never end before it disappears from the whole world
Next US occupation forces and QSD groups kidnap civilians in al-Bseira north of Deir Ezzor