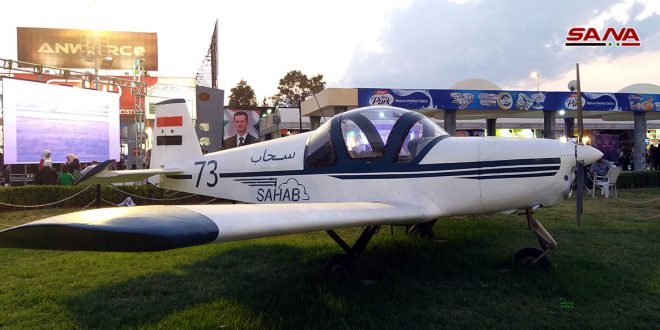 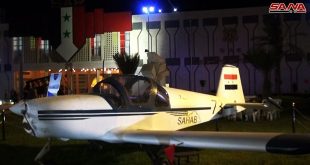 Sahab 73, a plane designed and built by Syrians during the war

Damascus, SANA – Manufacturing aircrafts locally is not a mere dream anymore with the debut of Sahab 73, the first Syrian-made light aircraft, in Damascus International Fair.

Exhibitor of Sahab 73, Eng. Safwan says while staring deeply at the aircraft as if it were the first time for him to see it “It’s unspeakable joy and a feeling of confidence that we can do it just like others can with complete competence and simple capabilities and support.”

The ID of the aircraft, which has been unveiled during the current event of Damascus International Fair though having already carried out some 50 flights, is Sahab 73 and it was born in 2011 by no more than ten engineers who have graduated from the Military Engineering Academy and the Higher Institute of Applied Sciences.

In an interview with SANA, Eng. Safwan reveals details about the building process of Sahab 73, saying “It is a light aircraft for training and it is equipped with two adjacent seats.

It works on a piston engine. The aircraft is 5.9 meters long with a maximus speed of 200 km per hour and a flying range of 4000 meters. The first nationally-made aircraft flies 180 km as a line of sight and needs a runway for landing …it runs on gasoline.”
Answering a question on the expected use of the aircraft, Eng.

Safwan says that it could be used for border control, persons transport, tourism but it would be basically used for training pilots.

Manufacturing aircrafts by Syrian hands would open the doors wide for building different sorts of planes including passenger and cargo planes aw well as warplanes as Sahab 73 is just the beginning for developing this industry, especially that the required technology for that is available according to the engineer.