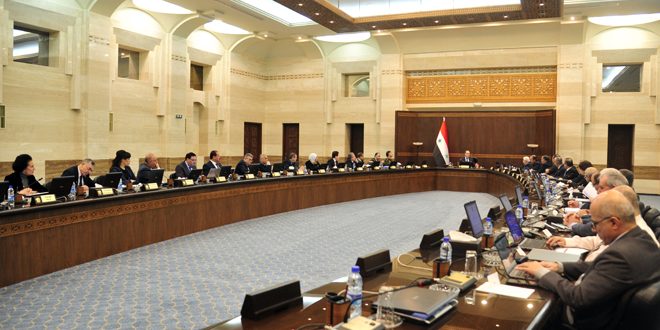 Damascus, SANA- The Cabinet discussed on Tuesday the exchange rate of Syrian pound against foreign currencies that indicates strong economy, which has withstood during the years of war, is ready to deal with any changes, whether on the level of imports or exports.

The Cabinet, at a weekly session led by Prime Minister Imad Khamis, affirmed that the Central bank of Syria steps will be clear regarding the issuance of certificate of deposit, encouraging interest rates and supporting exports.

Governor of the Central Bank of Syria (CBS) Dureid Dirgham told journalists in statement following the meeting that the economy situation today is more comfortable and can be described as strong, adding that the drop in the price of USD against the Syrian pound exchange rate is a message to the whole world that Syria is in a good situation.