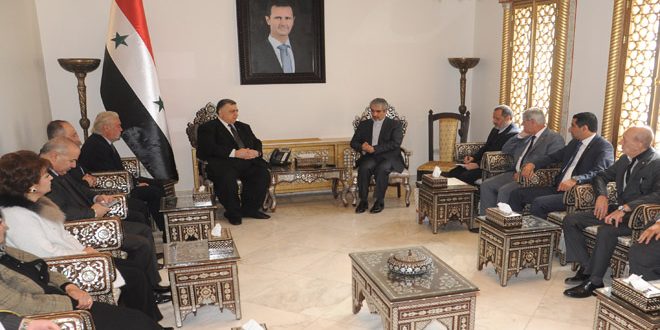 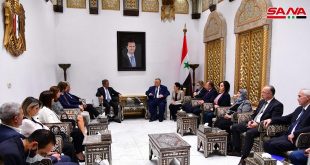 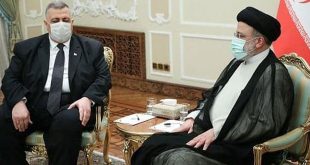 Damascus, SANA- Speaker of the People’s Assembly Hammoudeh Sabbagh stressed the importance of strengthening cooperation and reinforcing bilateral relations between Syria and Iran, especially the parliamentary ones.

During a meeting with Iranian Ambassador Jawad Tark Abadi on Tuesday, the Speaker pointed out to the important role played by Iran in cooperation with allies and friends to support Syria in its war on terrorism.

“Syria’s priority now is to eliminate terrorism and to encourage the local reconciliation as well as the return of people to their cities and villages,” he added, hoping that Iran will play a major role in the reconstruction process.

The Iranian Ambassador handed Sabbagh an invitation sent from Speaker of the Iranian Shura Council Ali Larijani to attend the 13th session of the Councils of the Parliamentary Union of the Organization of Islamic Cooperation (OIC) member states, which will be held In the Iranian capital of Tehran, starting from January 13 till 17 January.

The Iranian ambassador stressed that Syria’s victory over terrorism is a victory for Iran, hailing the wisdom and courage of President Bashar al-Assad, who was able to lead Syria and the Syrians to safety during the crisis.