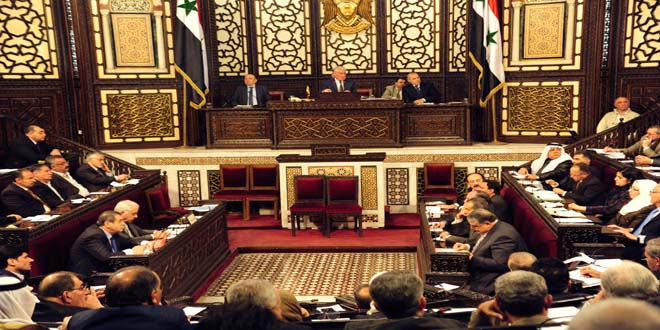 Damascus, SANA – The People’s Assembly discussed in its session on Tuesday the performance of the Higher Education Ministry and issues related to its work.

The Assembly members called on the Ministry to reconsider the law on organizing universities and explain the rumors about Syrian universities dropping out of international classification, in addition to criticizing the unified national test for university graduates and demanding its cancelation.

The members also addressed issues related to the curricula of universities, opening new faculties and institutes, building more student dorms, among other issues.

Responding to the members’ queries and comments, Higher Education Minister Atef Naddaf said the Ministry’s plan is based on horizontal expansion as long as the infrastructure and human resources are available.

He said that work is underway to study issues related to the pre-med school year, as for the law on organizing universities, he said that the academic and structure and infrastructure need to be changed and various bodies and legislations need to be restructured before amending this law which is on the Ministry’s agenda.

He pointed out that there are several active cultural exchange agreements with friendly countries, with more than 27000 exchange students studying abroad and 547 due to begin their studies.

Naddaf also said that the number of positions for university faculty members has been increased to 1560.