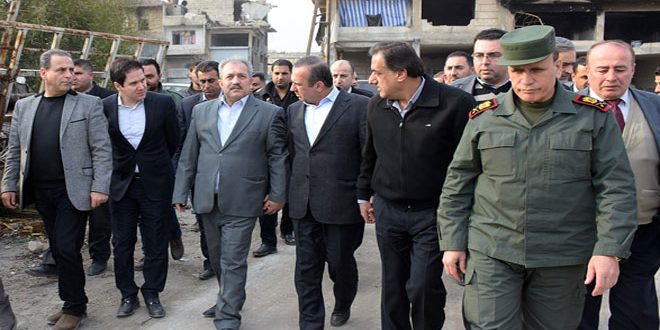 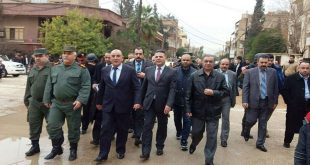 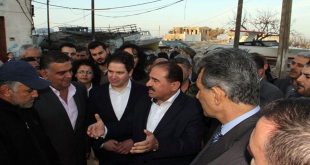 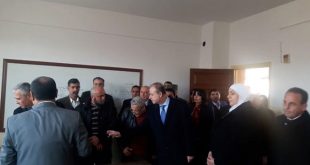 Aleppo, SANA – A ministerial delegation on Saturday visited Aleppo city and inspected the progress made in the implementation of the government’s rehabilitation and reconstruction projects to rebuild what has been destroyed due to terrorism.

Speaking during an extended meeting at Aleppo Municipal Palace, Public Works and Housing Minister Hussein Arnous said that the visit aims at inspecting what has been implemented so far regarding the reconstruction of basic infrastructure and the rehabilitation of services in the city. For his part, Local Administration and Environment Minister Hussein Makhlouf stated that the value of services and construction contracts reached SYP 6 billion, in addition to allocating SYP 2 billion to implement the Interior Ministry’s projects in Aleppo.

Minister Makhlouf added that the government has allocated SYP 2.3 billion to resume production at al-Sheikh Najjar industrial city while SYP 100 million has been allocated to restore the industrial areas in al-Arqoub, al-Ramouseh and al-Kallaseh. In turn, Minister of Health Nizar Yaziji said that the ministry has delegated a specialized engineering team to inspect terror-affected health facilities and hospitals in Aleppo, noting that an integrated plan has been set up to rehabilitate the damaged health sector, in addition to the establishment of a specialized center to provide medical treatment and free medicine to patients with chronic diseases.

Tourism Minister Bishr Yazaji said that Ministry has set up ambitious plans to restore the magic charm of tourism in Aleppo.

The delegation toured several residential areas which have been cleared of terrorists and inspected the rehabilitation processes of services and infrastructure projects.