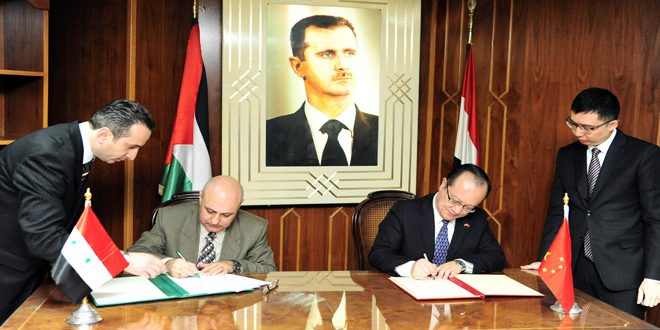 According to the agreements, china will provide two batches of humanitarian aid: the first batch is worth 40 million yuan while the second is estimated at 70 million yuan ( a total cost equals to USD 16 million).

In a statement following signing the agreements, Head of Planning and International Cooperation Commission Imad Sabouni  said that that the two agreements fall within the context of the ongoing cooperation between the two countries governments where  China, over the past years, has provided big support to Syria in the  international forums to overcome the crisis it has been passing through.

Chinese Ambassador in Damascus Qi Qianjin made it clear that the humanitarian assistance provided by his country’s government and the two agreements signed today confirm the depth of bilateral relations between the two countries, stressing that china is looking forward to  further cooperation in all economic, social and humanitarian fields.

He pointed out that the positive development of the situation in Syria due to the victories achieved by the Syrian Arab Army, especially in the city of Aleppo, poses a great opportunity for cooperation between the two countries in various fields and the participation in reconstruction stage as it encourages the return of trade exchange between the two countries to pre-crisis levels.

” In China, we are sympathetic with the Syrian people, who are suffering due to terrorism and backing the peaceful solutions to the crisis in Syria with adherence to the principle of protecting the unity and independence of the state and combating terrorism, which threatens  the entire world’s peoples not just the Syrians.” The ambassador concluded.