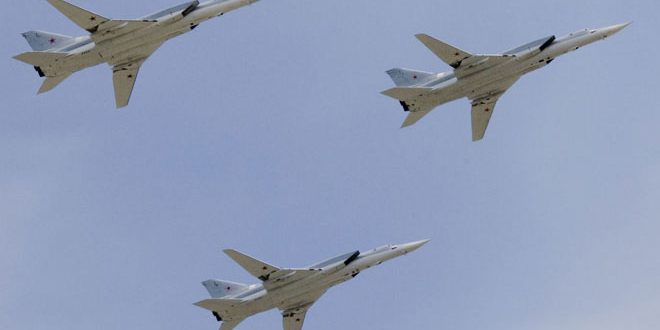 Moscow, SANA-Russian Defense Ministry announced on Monday that Russian Air Force bombed new sites for ISIS terrorist organization in Deir Ezzor Syrian province as in the framework of its participation to the war on terrorism at a request of the Syrian government.

In a statement, the ministry said that six Tupolev-22M3 long-range bombers took off from an airdrome in Russia to cross the airspace of Iraq and Iran to deal a massive strike on the newly-identified ISIS targets in the province of Deir Ezzor.

The ministry added that due to the strikes, two command centers, a number of weapons and ammunition depots and a large number of military equipment and terrorists were destroyed.

“The destruction of all designated targets has been confirmed by the means of objective monitoring,” the ministry said, adding that Su-30SM and Su-35S fighters, which had taken off from the Hmeimim airbase in Syria, provided air cover for the bombers.

The Russian aircrafts safely returned to their home bases after the mission.

Russian Defense Ministry Tu-22M3 bombers 2017-01-30
Manar
Share
Previous A New batch of Russian aid distributed in Jaramana city
Next President al-Assad to Maduro: What is going on in Syria and Venezuela a price for their commitment to sovereignty and independent decision