A New batch of Russian aid distributed in Jaramana city 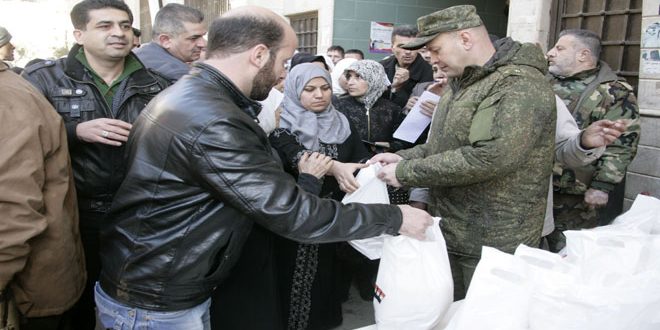 Damascus countryside, SANA – A new batch of humanitarian aid provided by Russia was distributed on Monday in cooperation with Damascus Countryside Governorate among displaced families in a temporary housing center in Jaramana city.

The Representative of Russian Coordination Center in Hmeimim, Col. Yuri Alexandrov said that two tons of humanitarian aid, which included 400 food packages, were distributed among the displaced families and the residents of the housing center, noting that the aid reflects the depth of relationship and friendship between Russia and Syria and the Russian people’s support for the Syrian people.

Meanwhile, a meeting was held in Jaramana City Council between the head of the National Operational Committee, the head of the Russian Coordination Center, and representatives in Zbden, Em al-Assafeer, and al-Mlieha towns, and Jaramana city for pursuing efforts to ensure the success the local reconciliations in the Eastern Ghouta.

The participants signed during the meeting documents on maintaining the safety of public and private properties, the removal of all armed manifestations in the towns, and supporting the governmental establishments in strengthening security and stability in these towns.