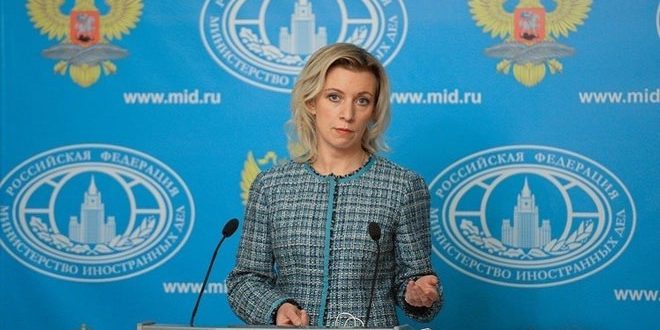 Moscow, SANA- Moscow considers the US decision to supply the armed groups in Syria with arms to be a hostile move, Russian Foreign Ministry spokeswoman Maria Zakharova, said on Tuesday.

Zakharova was quoted by TASS News Agency as saying “The transferred weapons would quickly end up in the hands of jihadists, and Washington must realize this… Perhaps, they even expect this to happen, since they actually sponsor Jabhat al-Nusra, which is a unit of Al Qaeda. This can hardly be called otherwise than aiding and abetting terrorists.”

“The relevant decision also poses a direct threat to aircraft of the Russian Aerospace Forces, other Russian military personnel, and our Embassy in Syria that has been shelled repeatedly, and that is why we consider this to be a hostile move,” Zakharova said.

“Instead of pooling efforts to counter rampaging extremists of every stripe and color, as we have suggested for a long time, Washington is staking on the provision of military aid to anti-government units, which differ little from bloody thugs,” the diplomat stated.

On December 23, US President Barack Obama signed into law a bill that authorizes the Pentagon’s actions to supply weapons to the so-called “moderate opposition” in Syria.

Zakharova affirmed that restoring Aleppo city by the Syrian Arab Army is an important step aimed at settling the situation in Syria, urging the British Foreign Secretary Boris Johnson to change his political speech about Syria.

“”We believe the liberation of Aleppo from militants to be an important step aimed at settling the situation in Syria while preserving the country’s unity and territorial integrity and preventing the Syrian state institutions from degrading,” Zakharova said during her weekly press conference .

The spokeswoman said that although militants destroyed many buildings, planted mines in many infrastructure facilities and left a large amount of ammunition, civilians in Aleppo have been gradually returning to peaceful life.

In a different context, Zakharova described the recent statements of the British Foreign Secretary Boris Johnson about the situation in Aleppo as “far from reality”, adding “Well, Boris Johnson is not a professional diplomat, but listen, I have never thought he is that unprofessional.”

She added that she will not comment on his words about the stepping down of President Bashar al-Assad which have become “a thing of the past”.

“I’d refrain from commenting on his words that President al-Assad is to go,” Zakharova said. “If Mr. Johnson happens not to know, this is what is being said only by the most frenzied opposition and militants whereas his colleagues changed their vocabulary on that topic long ago.”

“Judging by the statements made by the British colleague, he has little idea of what is going on there,” the Russian diplomat stressed. “I’d like to clarify the real state of things as for the situation with humanitarian monitoring in Aleppo, including in the context of the implementation of the United Nation Security Council’s recently passed Resolution 2328 on that matter.”
“Even before this resolution was passed, the International Committee of the Red Cross (ICRC), the Syrian Arab Red Crescent and the World Health Organization took effort to offer humanitarian assistance to the Syrian population,’ the Russian diplomat noted.

“Notably, we repeatedly spoke in favor of the United Nations participation in these efforts,” she said, adding that “corresponding structures joined the work back on December 15.”

“As of today, United Nations has more than 100 people in Aleppo, with more than 30 of them acting in the eastern part of the city,” Zakharova said.