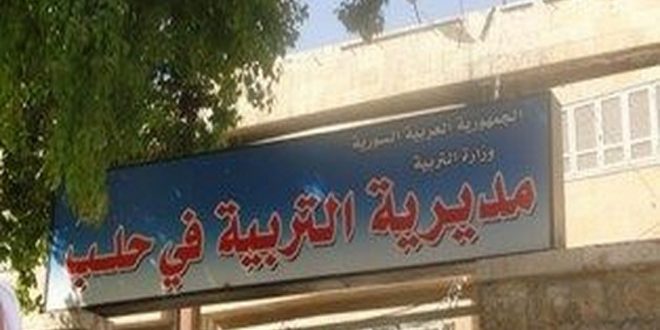 Aleppo, SANA-The Education Ministry opened five schools in the eastern neighborhoods of Aleppo which have been liberated from terrorism last Thursday.

In a statement to SANA reporter, Head of Aleppo Education Directorate Ibrahim Maso said that efforts are being exerted to re-open schools in the eastern neighborhoods for children to return to schools after years-long pause.

He pointed out that as of now, five schools have been opened comprised of 45 classrooms in Masakin Hanano, al-Helluk, Karm al-Tahan, al-Mashatia and al-Baiyadeh, adding that these schools can accommodate more than 650 students.

He added that efforts are continuous to open more schools in the next few days and perform the necessary maintenance for them with focus on the least affected schools to be rehabilitated first.

Maso said that the Directorate in cooperation with the Syrian Arab Red Crescent (SARC) and the United Nations Children’s Fund (UNICEF) has run 6 trucks carrying 300,000 books, desks, school bags and school kits for students in Manbij city in the northeastern countryside of Aleppo.

He added that 192 schools had been opened in Manbij city in which 65,000 students are receiving education.