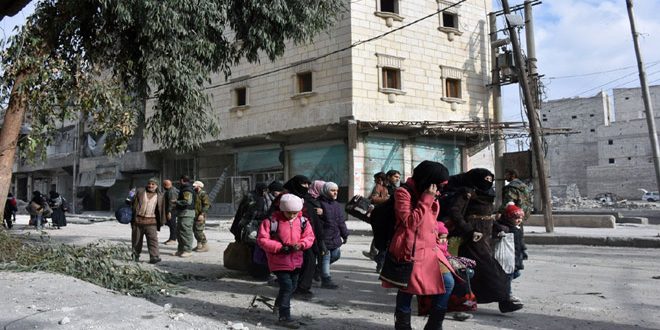 Aleppo, SANA – Three thousand civilians, who had been besieged by terrorist organizations, got out from the eastern neighborhoods of Aleppo city through humanitarian corridors set by the Syrian Army in cooperation with the Russian side.

SANA reporter in Aleppo said that the civilians’ exit, which started today at dawn, is continuous, adding that the army units and the concerned authorities are transferring them to makeshift centers in Jibrin and providing them with the requirements of residence in the centers.

In the same context, the Russian coordination center in Hmeimim pointed out that 7796 persons , including 3946 children, got out from the eastern neighborhoods during the past 24 hours.

In a statement, the Center stressed that 375 gunmen also gave up their weapons and turned themselves in to have their legal file settled due to the Amnesty Decree.

The statement clarified that since the beginning of the military operations, 110,000 civilians, including 44367 children, have been evacuated from the eastern neighborhoods, while more than 7000 people returned to their houses in the areas restored by the Army.