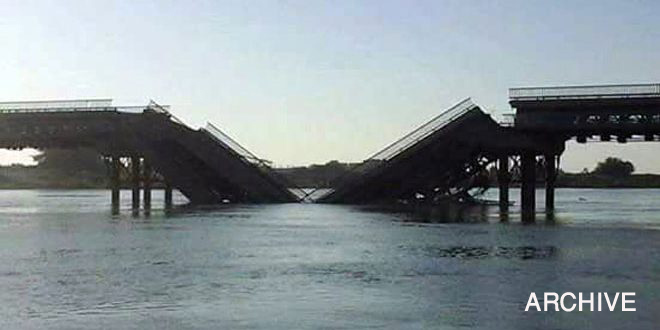 Deir Ezzor, SANA- The aircrafts of the US-led Coalition continued aggression on the Syrian infrastructure by launching a raid on Friday on al-Syasia Bridge in the city of Deir Ezzor.

SANA reporter in Deir Ezzor said that the Coalition’s airstrikes caused the destruction of al-Syasia Bridge located to the north of Deir Ezzor, adding that this bridge is the largest one in the city.

Eight bridges have been destroyed by the aircrafts of the US-led Coalition in Deir Ezzor province, the latest of which was al-Shihan Bridge near al-Salhin neighborhood in al-Bokamal countryside and Tarif Bridge in the western countryside which extended between Deir Ezzor and Raqqa provinces.

On Sep 27, the Coalition’s aircrafts launched strikes on two main bridges on the Euphrates River that resulted in the destruction of al-Asharah Bridge that links the river’s two banks in the eastern countryside of the province and al-Mayadin Bridge, disconnecting the areas located on both banks of the river.