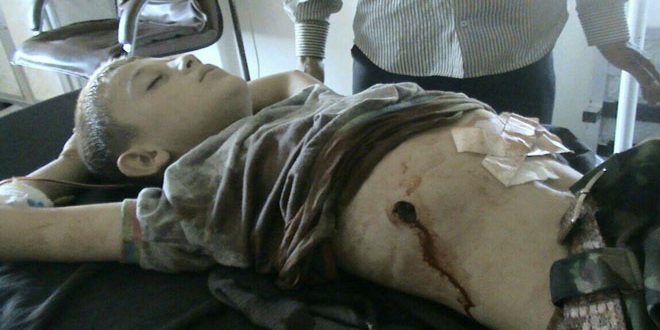 The military source said that armed groups breached the truce in Damascus and its countryside by opening fire using machineguns and mortars on Harasta suburb and Ibn al-Walid Hospital, in addition to firing two rockets east of the thermal power station in Jeroud and firing a mortar round south of the station.

In Aleppo, armed groups breached the truth 16 times by firing mortar rounds, rockets, and machinegun rounds at varying times at Jami’et al-Zahra’a and Burj al-Rih neighborhoods, the cement factory, the armament academy, the gas plant, al-Ramousa roundabout, the surroundings of the scientific research center housing, and the military housing area and the area west of it.

In Hama, armed groups fired mortar rounds twice at Ma’an town, and in Homs and its countryside they fired explosive shells, mortar rounds, and machinegun rounds at al-Abassyiah neighborhood, the surroundings of al-Houla and al-Rastan, Tal al-Qatari, and Jabbourin village.

In Quneitra countryside, armed groups fired a total of 9 mortar shells in two waves on Hadar town, in addition to targeting army positions in al-Menshiye neighborhood with a mortar rounds and two IEDs.

Later in the evening, the source said that 5 new breaches have been registered during the past four hours as armed groups fired military positions with rocket shells, mortar rounds, and machinegun in al-Bilaliye farms and al-Ma’aser area in the eastern mountain of Bloudan town in Damascus Countryside, and the villages of al-Hamriya and Hadar and Tal al-Sha’ar in Quneitra countryside.

The source added that armed groups had targeted with rocket shells, mortar rounds, and other weapons military positions in Harasta al-Qantara, al-Bilaliye, and al-Bahariye in the Eastern Ghouta in Damascus Countryside on Wednesday night and Thursday morning.

Earlier today, the source had said that two breaches took place in Damascus where armed groups targeted the army’s positions with sniper fire and gunshots in the neighborhoods of al-Qabon and Jobar.

In Damascus Countryside, the armed groups breached the truce three times by targeting army positions in Bala al-Jadida farms and Tal al-Sawan with machinegun fire and sniper fire and fired mortar shells at Howsh Nasri in the Eastern Ghouta.

Six other breaches were observed in Aleppo when armed groups targeted al-Farah School and the area around the Family House with mortar shells, while the areas of al-Ramousa and the 1070 Apartments project were targeted with sniper fire which caused the death of four persons and injuring of five others.

In Homs, the source said that armed groups fired a rocket shell on al-Abassyiah neighborhood in Homs city, a tank shell on Joalik village, and targeted Karmas village with machinegun fire.

The armed groups also targeted with mortar shells and heavy machineguns the army’s positions in al-Ghasibia village to the northeast of Homs city and the area surrounding al-Rastan Dam and Kafr Nan in the northern countryside of the province.

Later, a military source said that armed groups breached the truce regime by attacking the army’s positions in Maan town in the northern countryside of Hama province from the direction of Attshan and Um Hartin, adding that army units thwarted the attack, destroying 8 heavy machinegun-equipped vehicles and killing more than 50 of the attackers.

Earlier today, seven persons were killed and two others were injured due to terrorist attack with varied types of shells on al-Jora and al-Qossor neighborhoods in Deir Ezzor city.

SANA reporter said that ISIS terrorists targeted the neighborhoods of al-Jora and al-Qossor with a number of shells, claiming the lives of seven persons and injuring two others.

In Idleb, a child was injured as the armed groups opened sniper fire towards the besieged town of al-Foua, in the northern countryside of Idleb province, in another breach of the truce regime.

Local sources told SANA that the armed terrorist groups that hole up in Binnish town targeted with sniper fire citizens’ houses in al-Foua town, causing the injury of 7-year-old child.

A young girl was killed and three other people were injured when armed groups targeted Hadar village in the northern countryside of Quneitra with mortars and artillery shells.

A source at Quneitra Police Command told SANA reporter that armed groups positioned in Jobata al-Khasab fired seven mortar and artillery shells on the houses of Hadar village, claiming the life of a girl and injuring three persons from the same family, adding that the attack also caused significant material damage to citizens’ houses, and one of the houses was completely destroyed.

The truce regime is applied across Syria for seven days as of 19:00 on September 12th 2016 and until 23:59 on September 18th. The army reserves the right to respond decisively using all types of firepower to any breach by armed groups.