Zakharova: Russia is committed to implement Russian-US agreement on Syria in all its details 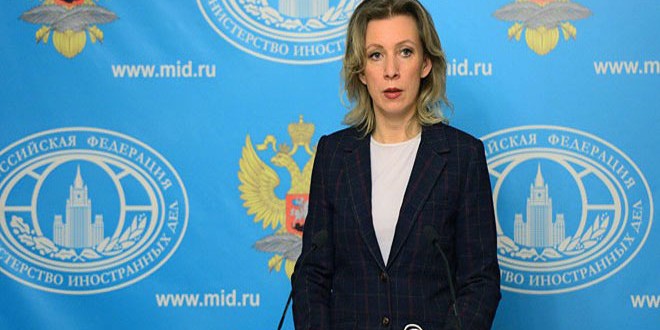 Moscow, SANA-The Russian Foreign Ministry affirmed the need to implement the agreements reached between Russia and United States in all its details including the establishment of a joint coordination center, noting that there are disagreements between the two countries on “Ahrar al-Cham” terrorist group and the separation process between the terrorists and the opposition in Syria

In a press conference on Thursday, Russian Foreign Ministry spokeswoman Maria Zakharova said that the Americans view Russia’s readiness to implement the agreements and the cessation of hostilities agreement as a test of Russia’s reputation, adding that framing this issue in this way is odd.

Zakharova expressed concern about the US statements despite all the achievements that have been achieved in Geneva, calling on the US to cooperate constructively.

She pointed out that the US is able to work when it wants to, and therefore there is need for responsible work for the implementation of the agreements instead of making statements, adding that Moscow insists on implementing the Russian-US agreement in Syria in all its details, including the establishment of the joint coordination center.

She noted that Moscow called from the start and still calls on the publication of all the Russian-US agreements on Syria to avoid speculation and incorrect interpretation.