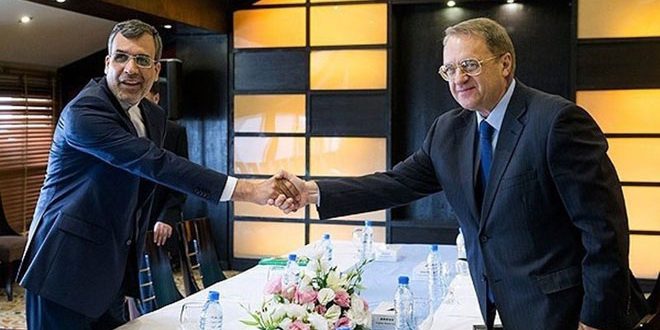 Tehran, Moscow, SANA – Russia and Iran stressed the need for armed “opposition” groups to abide by the cessation of hostilities in Syria, otherwise any other behavior will be considered in favor of the terrorist groups.

In a statement published by the Russian Foreign Ministry following consultations between Russian President’s Special Representative for the Middle East and Africa, Deputy Foreign Minister Mikhail Bogdanov and Iran’s Deputy Foreign Minister for Arab-African Affairs Hossein Jaberi Ansari, the two sides expressed satisfaction over the Syrian government’s constructive stance regarding the implementation of its commitments in terms of the cessation of hostilities agreement.

Bogdanov and Jaber Ansari stressed the need for the armed “opposition” groups to abide by this agreement, otherwise any behavior will be considered a proof on their adherence to military solution and its support to the ISIS and Jabhat al-Nusra terrorist organizations.

The two officials called for launching the intra-Syrian talks as soon as possible on the basis of the Geneva Communique of June 30th, 2012 and the UN Security Council resolution No. 2253

Iran’s Deputy Foreign Minister for Arab-African Affairs Hossein Jaberi Ansari stressed that the responsibility of implementing and making the Russian-US agreement a success lies on the shoulders of the parties that have reached it.

In a press conference held in Moscow on Thursday, Jaberi Ansari said that Iran welcomes all humanitarian efforts and the international community’s endeavors to fight the terrorist groups in Syria as well as every step that helps alleviate the suffering of the Syrian people.

He stressed that combating terrorism, solving regional disputes through peaceful means, the peoples’ right to self-determination are the main pillars on which the Iranian policy is based.

Jaberi Ansari said: ” Iran welcomes the terms of the Russian-US agreement regarding counter-terrorism, yet and in light of its previous experience with the US, it sees that Washington doesn’t fight terrorism but rather uses it as part of its foreign policy to get rid of governments they dislike.

He underlined that any military intervention in other states should comply with the UN principles and in coordination with the legitimate and central government of that state to preserve its national sovereignty and territorial integrity.

The Iranian Deputy Foreign Minister said the latest Israeli aggression to support the terrorist groups in Syria stresses that the Zionist entity is interested in the continuity of terrorist war on Syria as long as it serves the entity’s goals and settlement schemes.

armed opposition groups Iran Russia 2016-09-15
ghossoun
Share
Previous Moscow is committed to the implementation of the Russian-US agreement on Syria
Next Borodavkin: Terrorists impede arrival of humanitarian aid to the eastern areas of Aleppo