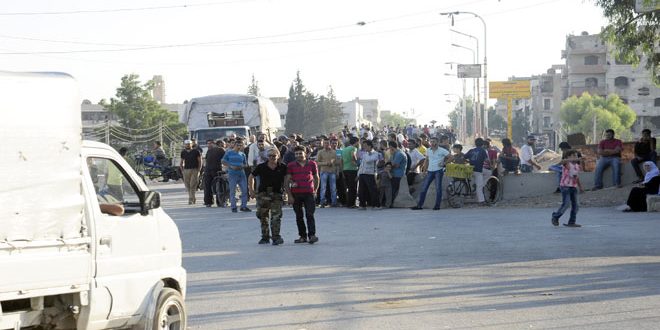 Head of al-Moaddamiyeh’s city council Bassam Karbouj, who is member of the reconciliation committee, told SANA reporter in a statement that 300 gunmen from the city turned themselves in and handed over their weapons to the authorities, which in turn settled their legal status in implementation of the reconciliation agreement and the Amnesty Decree no. 15 for 2016.

Karbouj stressed keenness on accomplishing the reconciliation in al-Moaddamiyeh city as quickly as possible and settling the files of the gunmen in it in preparation for fully evacuating the city of weapons and militants.

He noted that the locals of al-Moaddamiyeh have been pressuring the gunmen to turn themselves in and have their legal status settled so that to establish security and stability in the city.

During the past week, al-Moaddamiyeh city saw hundreds of people from Daraya city- where a settlement agreement was accomplished-being evacuated and transported to the makeshift center in Harjalleh village in al-Kiswa area.

The local reconciliation in al-Moaddamiyeh city was achieved on December 25, 2013.