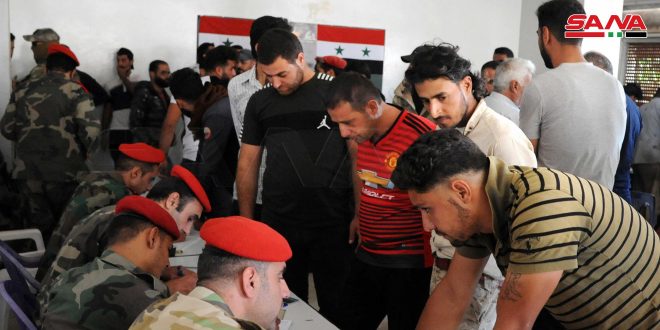 Daraa, SANA- Tens of militants, wanted persons and military deserters from Jasem city and its surroundings in Daraa northern countryside have joined the process of settlement.

During the past month, Daraa province witnessed similar settlement processes in Daraa al-Balad neighborhood, the cities of Nawa, al-Yadouda , Mzeireb, Tafas, Tel Shehab, the villages and the towns of Yarmouk Basin in the northwestern and the northern countryside.

SANA reporter in Daraa said that the competent authorities, in cooperation with the army units, and in the presence of a number of dignitaries in the region, settled the cases of a number of militants, wanted persons and deserters from military service from the town of Inkhil and its surroundings according to the settlement terms proposed by the state.

The militants handed over their weapons to the Syrian Arab Army.