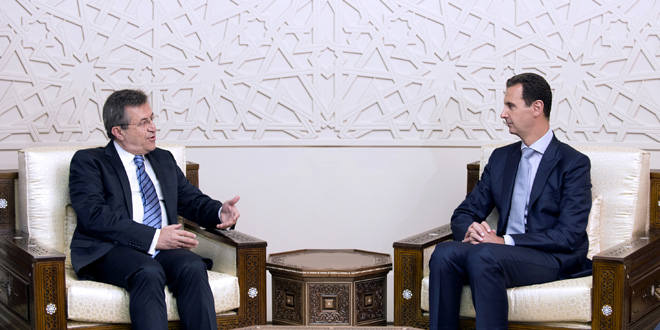 Talks during the meeting discussed the situation in Syria and the threat posed by terrorism to the region and Europe, in addition to discussing the historical relations between the two countries and their peoples and the importance of revitalizing these relations.

President al-Assad underlined the importance of visits conducted by European parliamentarians and political party leaders in order to create a realistic image of what is happening in Syria which would help their countries correct their policies towards the region.

His Excellency pointed out that there are many lessons that the region and the world can learn from the terrorist war that targets the Syrian people, the proof of that being the wave of terrorism that struck in several states in Europe and the world recently.

President al-Assad said that the problem of many Western states’ leaders with Syria is that it has an independent decision, and so they supported terrorists to weaken it and make it a satellite state, but this policy reflected negatively on the interests of their people in terms of security and economy.

The President affirmed that the Syrian people are determined to maintain their steadfastness and to defending their country and their independent decision.

For their part, the delegation members voiced support for Syria, particularly since today it represents the first line of defense against terrorism, affirming that they will exert all possible efforts to correct the wrong impression about the situation in Syria and to convince their government that terrorism is the real enemy which poses a threat to everyone, and thus the interest of the Greek people requires supporting Syria in its war on terrorism.

In the same context, Deputy Prime Minister, Foreign and Expatriates Minister Walid al-Moallem met the Greek delegation, affirming to them that Syria, which is fighting terrorism on behalf of the world’s nations, is committed to realizing a political solution for the crisis in Syria that meets the aspirations of the Syrian people.

In turn, the delegation members said that Europeans are beginning to realize the important role Syria is carrying out in fighting terrorism for the good of mankind.