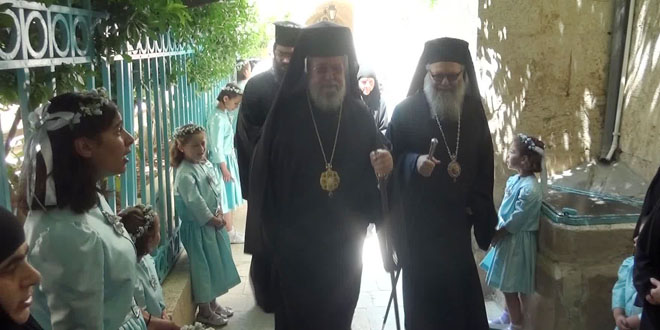 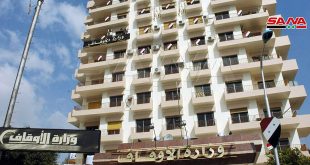 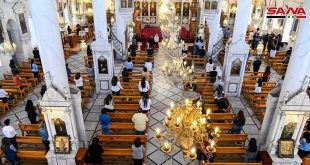 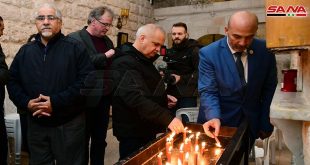 Damascus Countryside, SANA – Archbishop of Nova Justiniana and All Cyprus Chrysostomos II and Greek Orthodox Patriarch of Antioch and All East John X Yazigi visited the Patriarchal Convent of the Lady of Sednaya in Sednaya town, Damascus Countryside.

The Archbishop and the Patriarch, accompanied by bishops and priests, were received by Abbess Febronia Nabhan, the convent’s nuns, the girls from its orphanage, and locals from the town.

During the visit, the Archbishop and the Patriarch presided upon prayers for peace in Syria, and visited al-Shaghoura shrine, with Abbess Febronia presenting Archbishop Chrysostomos II with an icon representing the Lady of Sednaya. Prior to that, the Archbishop and the Patriarch visited St. Thecla Monastery in the town of Maaloula, witnessing the destruction caused to the church at the hands of terrorists and the renovations currently being carried out, in addition to visiting the Prophet Elias Greek Orthodox Church which was also damaged by terrorists and is being renovated.

In a statement to journalists, presenting Archbishop Chrysostomos II denounced the vandalism inflicted upon the town of Maaloula and its religious sites, stressing that war only brings destruction and hoping that the future will bring only good things to Syria and its people.

In turn, Patriarch John X Yazigi said that Maaloula isn’t just a Syrian spiritual and religious site; it is also a world heritage and cultural site, and the attack on it is an attack on civilization and cultural values, adding that the return of the people of Maaloula to their homes and the restoration of the monastery shows commitment to the homeland.

The Archbishop and the Patriarch also visited the Grand Umayyad Mosque in Damascus, where they were briefed on the history of the mosque and the renovations carried out to it, in addition to visiting the shrine of St. John the Baptist, while Advisor to the Religious Endowments Minister Nabil Sleiman presented Archbishop Chrysostomos II with the commemorative plate of the Grand Umayyad Mosque.