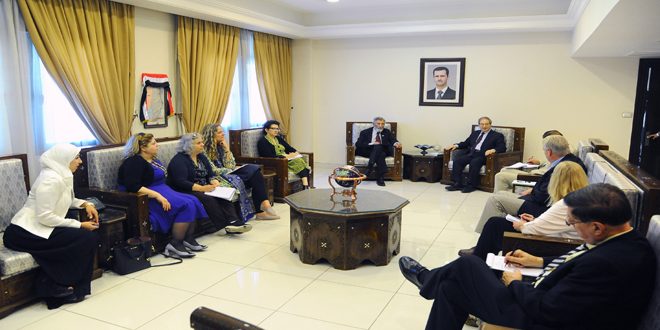 During the meeting, Mikdad briefed the delegation on the situation in Syria and the terrorist war waged against it with a direct support by some Western countries and states in the region, affirming the need to convey the true image of what is happening in Syria to the US people. He hoped that the international community will play an important role in combating terrorism in Syria and stopping foreign support for terrorism which will lead to ending the crisis in Syria and achieve peace for the Syrians.

For his part, head of the delegation stressed the delegation’s keenness to be informed about the real situation in Syria, particularly in what is related to the US interference, affirming that the Syrian people and leadership have the right to fight terrorism and that the international community needs to offer all possible support for Syria in the face of this unjust war. Commenting on the recent Russian-US talks, Mikdad said in a press statement he wished that these talks would be conducted within the framework of the fight against terrorism and contribute to stopping the Turkish intervention in the internal affairs of Syria through closing the Turkish borders.

For his part, Gerry Condon, member of the delegation, pointed out that the delegation is comprised of a number of peace groups as he represents a US Army Veteran group who rejects the US policy towards Syria, adding that their visit aims at supporting Syria.

Fayssal Mikdad US Peace Council delegation 2016-07-25
Manal
Share
Previous Al-Jaafari: It is not possible to end the suffering of the Syrians through the political blackmail, but through combating terrorism
Next Four citizens killed, several others injured in terrorist attacks in Aleppo and Damascus