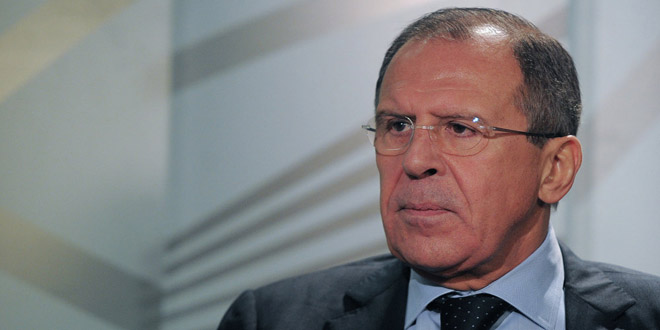 Moscow, SANA – Russian Foreign Minister Sergey Lavrov reaffirmed his country’s stance that calls for solving the crisis in Syria politically based on the International Syria Support Group (ISSG) and the UN Security Council resolutions, emphasizing the necessity of combating the international terrorism represented by ISIS, Jabhat al-Nusra and al-Qaeda.

In a joint press conference with his Saudi counterpart Adel Al-Jubeir in Moscow on Thursday, Lavrov said “We affirmed the necessity of solving all issues of the Middle East on the basis of the international legitimacy, and the comprehensive national dialogue in all states of the region and securing the rights of all minorities,”

“We have confirmed full commitment to the decisions on Syria that were taken by the International Syria Support Group and the UN Security Council,” Lavrov added.

The Russian Minister affirmed that “We’re unanimous that the threat of terrorism and extremism requires uncompromising counteraction to prevent the triumph of the plans nurtured by the ISIS, Jabhat al-Nusra, al-Qaeda and similar groupings.”

“We once again drew partners’ attention to Russian President Vladimir Putin’s initiative to form a broad anti-terrorist front under the UN auspices,” he added.

In his comments about coordination with the US in fighting terrorism, Lavrov said this coordination has not yet been finally established.

According to Lavrov, the US has pledged to achieve separation of the Syrian opposition and Jabhat al-Nusra terrorist group soon but this has not yet happened.

“The effectiveness of the anti-terrorist operation in Syria is hampered by the situation when many groups of the so-called patriotic opposition are territorially mixed with terrorist groups, first of all Jabhat al-Nusra,” Lavrov noted.

“Back in February this year, US colleagues promised us in the framework of ISSG and via other channels that they will soon achieve through their representatives the separation on the ground between patriotic opposition and Jabhat al-Nusra,” he added.

Lavrov pointed out that a week ago Moscow suggested to the US to set May 25th as a date to secure an exit for groups that want to join the political process out of the areas where strikes are launched, adding that the American side requested additional time to study the suggestion and Russia agreed.

Lavrov stressed Russia’s full adherence to all that is stated in the UN resolutions on the Syrian-Syrian dialogue, pointing out that all of these resolutions and those of the ISSG affirm that the Syrian people alone have to decide their own future.

The fourth meeting of the strategic dialogue Russia-Gulf Cooperation Council kicked off earlier on the day where Lavrov said that over the past years, the dialogue has proved its efficiency on global and regional issues.