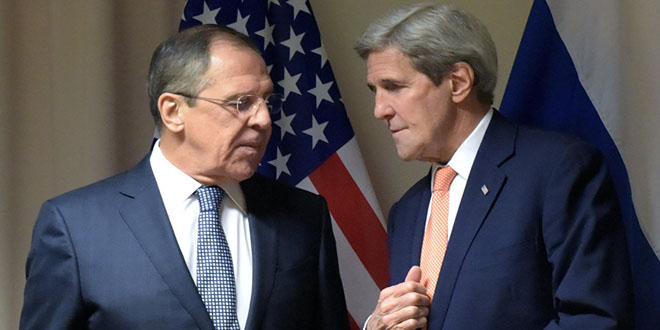 Moscow, SANA – Russian Foreign Minister Sergei Lavrov and US Secretary of State John Kerry discussed in a phone talk on Thursday means of solidifying the agreement of cessation of hostilities in Syria and the political settlement and counterterrorism.

Sputnik news agency quoted the Russian Foreign Ministry as saying in a statement “In continuation of the recent International Syria Support Group meeting, co-chaired by Russia and the United States, the sides continued to discuss ways to overcome the conflict in that country, including strengthening the ceasefire regime, with the exception of the fight against terrorist groups.”

“It was agreed that Russian and US forces, through established coordination mechanisms, will develop specific measures for more effective separation of supporters and opponents of the truce,” the statement added, noting that both officials discussed steps for stopping foreign support and funding for terrorists in Syria.

Lavrov and Kerry also discussed other international issues, “including steps that could be taken by the international community to give a positive dynamic to the process of Palestinian-Israeli settlement,” according to the statement.

John Kerry Sergey Lavrov 2016-05-19
h.said
Share
Previous Two civilians killed due to explosion of an ISIS landmine in southern Hasaka
Next Gatilov: The Syrian army does not breach cessation of hostilities agreement