Gatilov: The Syrian army does not breach cessation of hostilities agreement 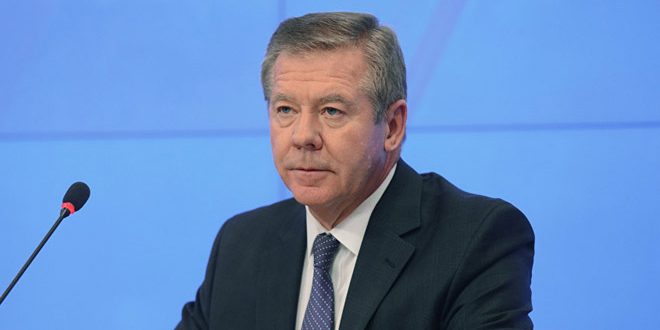 Moscow, SANA – Russian Deputy Foreign Minister Gennady Gatilov affirmed on Thursday that the Syrian army does not breach the cessation of hostilities agreement in Syria and that its effort is directed to fighting terrorism.

In a statement quoted by Sputnik news agency, Gatilov said the cessation of hostilities agreement excludes Jabhat al-Nusra and the other terrorist organizations placed on the UN Security Council sanctions list, making it clear that all the military operations carried out in Syria are aimed at eliminating these terrorist groups.

He pointed out that the conditions are not yet favorable for holding direct talks between the parties to the Syrian-Syrian talks in Geneva.

Gatilov Geneva talks Jabhat al-Nusra Syria Syrian army 2016-05-19
Manar
Share
Previous Russia and US will develop measures for separation of supporters and opponents of the truce
Next DSE Thursday session closes at 1,505.53 points