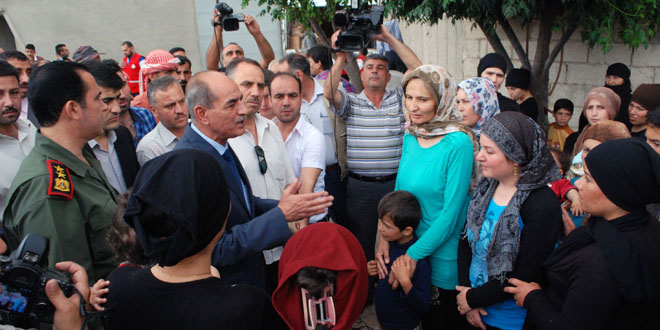 Hama, SANA- Hama Governor Ghassan Khalaf visited displaced families who left al-Zara village due to the attacks and massacres committed by the terrorist groups and are currently staying at Trad village to the north of Salamiyeh city. Khalaf inspected the conditions of the families and inquired about their needs, while the Syrian Arab Red Crescent (SARC) distributed food and health packages among them.

On May 12, terrorists from Jabhat al-Nusra, Ahrar al-Sham movement, and other terrorist groups affiliated to them committed a massacre against the people of al-Zara village in the southern countryside of Hama province, with the terrorists also kidnapping women and children from the village and looting and vandalizing houses and properties.