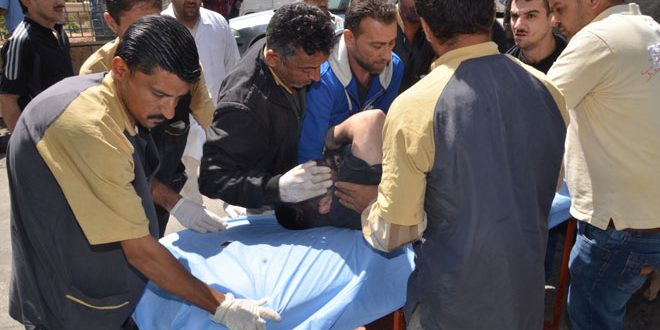 Aleppo/Idleb, SANA – Two civilians were killed and two others were injured in terrorist sniper shootings in al-Ramousa neighborhood in Aleppo city on Thursday.

The casualties were caused as snipers opened fire on a number of passing cars in the neighborhood, according to SANA reporter.

Earlier on the day, terrorists fired rocket shells on al-Jalma village in Efrin area in the northwestern countryside of Aleppo.

Local sources told SANA that the source of the shootings was a terrorist positioned in Maaratmsarin.

The neighboring Kefraya and al-Fouaa towns, located in northern Idleb, are besieged by takfiri groups affiliated to the so-called Jaish al-Fatah terrorist organization.

Al-Fouaa was also targeted on Tuesday with more than 40 rocket shells that left five civilians injured.