Khan Asaad Basha in Damascus, a masterpiece of Islamic architecture 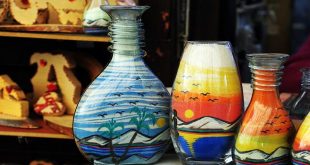 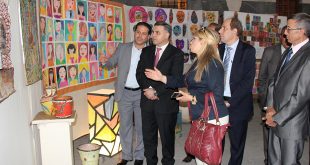 Damascus, SANA – Nestled in the Old City in Damascus, Khan Asaad Basha is one of the most prominent examples of Islamic architecture, reflecting the city history and the civilizations that rose and fell in it across the ages.

This heritage site is an historical inn (the Persian word “khan” means inn) was built between 1751 and 1753 AD when Damascus was an important for economic and commercial site on the Silk Road.

Site director Ghada Sleiman said that the Khan was built upon the orders of Ottoman Vali Asaad Basha al-Azem to cater to merchants and support the economy, using almost all the stones available at the time to make it the biggest and most impressive resting point on the Silk Road and the Levant pilgrimage rout, in addition to serving as a market for merchants to trade their wares.

She said the architects and builders who built the Khan were from Aleppo’s Christians who had long experience in building such structures, but history nearly forgot them and only remembers the one who ordered it built.

Among the figures who stayed in the Khan is French poet Alphonse de Lamartine, who visited Damascus in 1833 and mentioned the site in his book “Voyage en Orient” and praised its splendor and architecture.

Back in the day, trade caravans stopped at the Khan and unloaded their goods in its courtyard, and then they were stored in one of its 40 ground-floor chambers, each consisting of an antechamber used as an office and a bigger chamber or two used for storage.

The second floor contains 44 rooms which is where the visiting merchants slept.

Sleiman said that a fire broke out in the Khan back in 1759 when an earthquake struck Damascus, destroying either 3 or 5 of its nine domes, depending on the historical source.

The overall area of the Khan is 2,500 square meters. Its western façade is 47 meters lone and overlooks al-Bzouriyeh Souq, a marketplace renowned for selling spices and medicinal herbs.

This façade hosts the Khan’s main gate, a small mosque, and shops, while the southern façade is 52 meters longs and hosts more shops. The eastern façade is a plain wall, and the northern façade is blocked off by buildings such as Noureddin bathhouse and al-Kamiliye al-Tankaziye school.

As for the interior, the Khan’s main structure is surrounded by a covered courtyard containing a fountain, stone benches, Corinthian, Ionian, and Tuscan pillars, in addition to arches, domes and semi domes, with stories saying that once a large ruby was placed above one of the Khan’s doors, and that it was worth enough money to rebuild the Khan were it destroyed, but this ruby went missing after the earthquake.

The walls and façades of the Khan are covered in rich, intricate decorations and sculptures, ranging from geometric patterns to writings and poetry verses.

The Khan continued to serve as the main inn and resting place for travelers up until the early 20th century when hotels began to open in al-Marjeh Square and nearby areas, with the ownership of the Khan falling to the merchants of al-Bzouriyeh Souq who used it for storage. In the 80s, the Khan was cleared and declared a heritage site, and the Department of Museums and Archeology in Damascus took charge of restoring it and maintains it to this day. 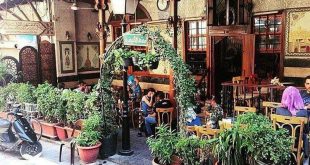 Al-Nawfara Café is the oldest café in Damascus, the capital of the Syrian Arab Republic. …