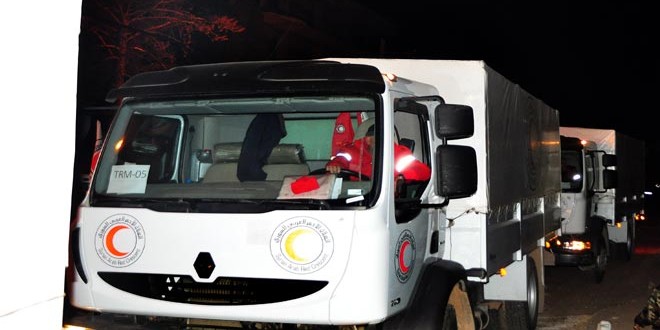 Damascus, SANA – The Syrian Arab Red Crescent (SARC) reaffirmed that it is continuing its role to deliver humanitarian aid to all areas across Syria.

The SARC said in a statement that in cooperation with the offices of the United Nations in Syria, the organization sent on Wednesday 115 lorries loaded with food and health supplies that entered Madaya, al-Zabadani and al-Moaddamiyeh towns in Damascus Countryside and Kefraya and al-Fouaa towns in Idleb.

65 of the total number of lorries were sent to Madaya and al-Zabadani and 32 lorries went to al-Moaddamiyeh, while the share of Kefraya and al-Fouaa was 18 lorries.

Aid delivery has been going on in various areas in the country, carried out by the SARC in cooperation with its partners operating in the humanitarian field, the statement said.

Earlier this month, more than 12000 food packages had their way into al-Moaddamiyeh town and al-Tal city in Damascus countryside, only two weeks after 88 lorries loaded with aid supplies entered Madaya, under a SARC-UN supervision.

In conjunction with aid delivery in Madaya, aid was also sent to Kefraya and al-Fouaa, the two towns which have been besieged for more than two years by the terrorists of the so-called “Jaish al-Fatah” organization that is backed by the Saudi and Turkish regimes.

Along with the aid, two mobile clinics were sent to Madaya, Kefraya and al-Fouaa and a SARC medical team provided services in the three areas, said the SARC statement.

“The organization seeks to reach the most vulnerable groups,” said the SARC head Abdul Rahman al-Attar, stressing that the SARC teams are ready to perform their role in delivering humanitarian aid to the affected groups in all Syrian areas.

Last Thursday, the SARC branch in the eastern Deir Ezzor province started distribution of 37.5 out of 90 tons of food supplies that will successively reach Deir Ezzor city, which lives under ISIS siege.