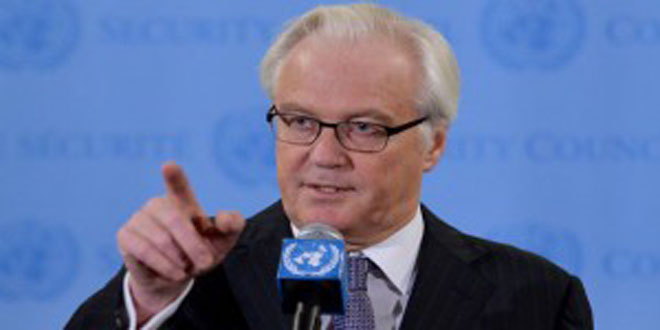 NEW YORK, SANA – Unlike the US-led Western alliance, Russia’s anti-terror operations in Syria are in full compliance with the international law, said Vitaly Churkin, Russia’s Permanent Representative to the United Nations.
Churkin said in a press statement in New York on Wednesday, quoted by Russia Today, that Russia’s actions in Syria based on legal ground and upon a request from the Syrian government, differently from the US-led Western alliance whose operations don’t accord with the international law.

Russian warplanes carried out more than 6000 sorties against terrorists’ sites since the beginning of the Russian air operations against terrorism in Syria on September 30th, inflicting heavy losses upon them in personnel and equipment.
He declared that we don’t have to justify our actions in Syria because they are carried out in public and their results are announced by Russian Defense Ministry daily.
The alliance forces hasn’t provided any explanation to its actions in Syria and Iraq neither revealed the goals or results of their strikes, moreover, the alliance rejects to cooperate with Russia in its anti-terror war, Churkin added.

Meanwhile, the Western alliance airstrikes failed to fulfill their goals since they were launched in September 2014, rather they contributed to the expansion of ISIS and its danger on the region and the whole world.
R. Raslan/ Barry

churkin 2016-02-10
Barry Temmo
Share
Previous Lavrov, Kerry: UNSC resolution no.2254 does not allow any preconditions
Next President Rohani affirms support to Syria in the war against terrorism