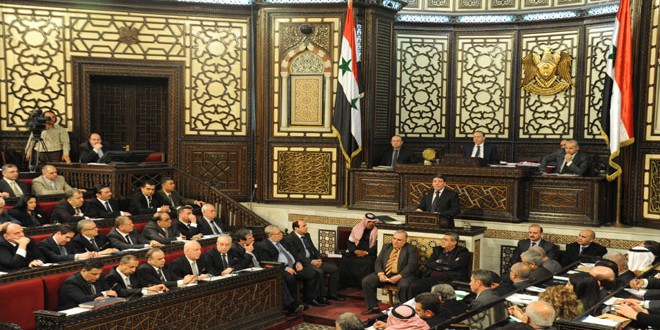 Damascus, SANA – Speaker of the People’s Assembly Mohammad Jihad al-Laham highlighted on Sunday the need to keep pace with and reinforce the military achievements made by the Syrian Arab Army in many areas across the country through securing supply lines of food and services to the locals in those areas.

Chairing the first session within the new legislative term, al-Laham called for more efforts to provide the necessary services to residents in the areas to which the army recently restored security in Homs, Aleppo, Lattakia and Daraa so as for the social, economic and agricultural life there to be back to normal. Al-Laham said the current stage is a critical moment in the history of Syria, and that Syria’s enemies are in a state of confusion that is evident in their failure to form a unified delegation for negotiations.

He also voiced appreciation for the government’s tireless efforts to provide the requirements of Syria’s steadfastness and securing the needs of displaced people, adding that this doesn’t excuse shortcomings in some sectors and areas.

Al-Halaqi said the government’s work during 2016 will be focused on improving the economic, agricultural and services indicators, which have suffered severe drops due to the ongoing terrorism war since 2011, through employing non-consuming sustainable development tools.

It is necessary to invest in all resources and potentials to prepare for the reconstruction process, the Premier added. He affirmed the government’s continued efforts to work to provide the basic needs of the citizens and to support micro, small and medium-sized enterprises, noting that focus will also be placed on protecting the public sector and creating new investment channels to trigger the economic growth in parallel with the implementation of the administrative reform and fighting corruption project.

The Prime Minister held terrorism and its backers – particularly Saudi Arabia, Turkey, and Qatar – responsible for the bloodshed and destruction in Syria, asserting that there can be no settlement or dialogue with terrorists; rather they will continue to be crushed on the battlefield.

Al-Halaqi affirmed that the government is committed to providing the needs of relief work and increasing the delivery of aid to all areas in Syria.

He also said the government is committed to bolstering cooperation with friendly countries and to relaying the reality of the conspiracy targeting Syria to international organizations and to friendly and respectable states. Regarding the dialogue in Geneva, al-Halaqi said the Syrian government went to Geneva without preconditions to prepare a roadmap that allows the Syrian people to decide their future on their own, but the dictations and conditions which the “Riyadh opposition” delegation submitted due prevented the launch of the talks.