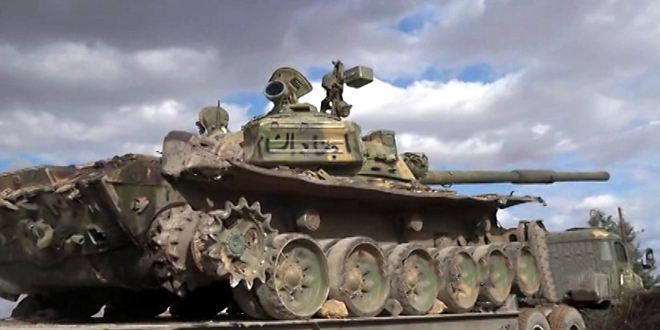 Provinces, SANA-The army on Saturday went ahead in its war against terrorist organizations, establishing full control on new areas in Aleppo and Lattakia main cities.

Earlier, a military source told SANA that army units established full control over the village of Nasrallah in Deir Hafer area in the eastern countryside of Aleppo province after eliminating the latest site of Islamic State in Iraq and Syria (ISIS) terrorist organization in the village.

The source added that an army unit targeted the ISIS gatherings positioned in the village of Nasrallah, northeast of Kwairis Airport, about 45 km of Aleppo city.

The army established full control over the village, while the engineering units combed the area completely and dismantled dozens of explosive devices and mines planted by the ISIS terrorists in the houses and farming lands.

Meanwhile, the army also established full control over new areas in Kinsaba  in the northeastern countryside of the coastal Lattakia province after killing a number of terrorists and destroying their weapons.

A number of terrorists were killed and others fled to the neighboring mountains and forests, while the army units pursued them, inflicting heavy losses upon them in equipment, according to the source.

Emir of Jabhat al-Nusra in southern area killed in Daraa

The self-claimed Emir of Jabhat al-Nusra terrorist organization in the southern region nicknamed as Abu Jleibib al-Ordoni was killed in a detonation of an explosive device in the eastern countryside of the southern Daraa province.

Civil and media sources said that “the security general official and Emir of Damascus and Horan in the terrorist organization of Jabhat al-Nusra, al-Qaeda branch in the Levant the Jordanian terrorist nicknamed Abu Jleibib was killed on Saida-Kahil road in Daraa province after an explosive device went off, leaving him dead and destroying his car.”

Army units established control over Marhatan village in al-Baiyarat area to the west of Palmyra in Homs countryside.

The army’s air force targeted and destroyed ISIS headquarters and centers in and around al-Qaryatain city, 85 km southeast of Homs city.

The army’s air force launched a series of airstrikes on Saturday morning targeted Jabhat al-Nusra gatherings and centers in al-Latamneh town in the northern countryside of Hama province.

The targeted centers were destroyed in the airstrikes, along with vehicles equipped with machine guns.

In the southern countryside of the neighboring Idleb province, terrorists from “Jaish al-Fatah” were killed or injured and their weapons and equipment were destroyed as army airstrikes hit their hideouts in al-Tamanaa village in Maaret al-Nouman area. 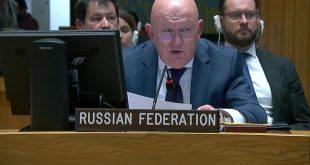