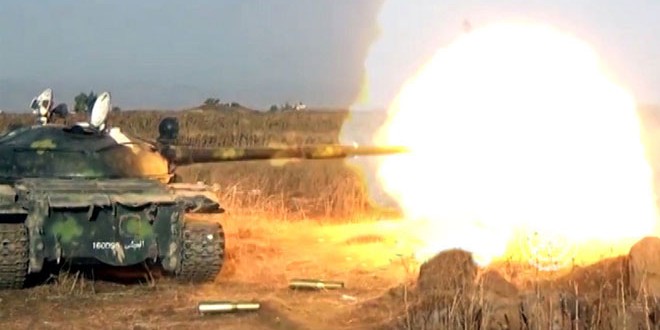 Provinces, SANA-The army continued on Sunday its large-scale operations against terrorist organizations in different provinces where it killed more than 35 ISIS terrorists in the eastern area and destroyed their weapons and vehicles.

An army unit carried out a pre-emptive operation against terrorists of “the Islamic State in Iraq and al-Sham” (ISIS), who tended to infiltrate into safe areas from al-Ommal neighborhood in Deir-Ezzor city, Killing 20 of the terrorists and destroying their weapons.
A military source told SANA that another army unit destroyed an ISIS terrorists’ den in the fields of al-Morei’ia to the eastern countryside of the eastern province, killing 15 terrorists including Abu Usama al-Tunisi, in addition to other Chechen terrorists.

Many identical reports indicated that ISIS terrorist organization liquidated more than 200 of its mercenaries, most of them Chechens in charges of a defection bid, throwing their bodies in al-Houta area in the countryside of Raqqa province.

An army unit detonated a booby-trapped car loaded with big amounts of explosives by the terrorists of the Islamic State in Iraq and Syria (ISIS) terrorist organization before arriving one of the military posts on the road of Tal Mabit, 18 km east of
Hasaka city.

A field source told SANA Sunday that the army unit clashed with the ISIS terrorists following the explosion of the car, killing a number of ISIS and destroying their weapons and ammunition.

16 members of Takfiri terrorist organizations affiliated to the so-called Jaish al-Fateh were killed in the southeastern countryside of Idleb province according to field sources.

Army units thwarted  a terrorist attack launched by terrorist groups belonging to the so called ”Jaish al-Fatah” against a number of residential gatherings in al-Skeilbia countryside to the northwest of Hama city.

The army units in cooperation with popular defense groups clashed with large numbers of terrorists who assaulted from the four axes in the area around Tel Hawash, al-Qabo, al-Baneh Tel al-Sakhr to the north of Kafr Nabbudah town.

Dozens of terrorists were killed or injured during the clashes while others fled away, the sources added.

Army units targeted ISIS concentrations on Palmyra-al-Bayarat road and on Ein Hassein road in Homs eastern countryside, killing scores of terrorists and destroying a number of vehicles equipped with machineguns.

An army unit killed and injured all members of terrorist groups affiliated to “Ahrar al-Sham” terrorist organization in Talbeseh in the province’s northern countryside.

Army units adopted military tactics commensurate with the nature of the area which terrorist organizations were using as a base to launch their rocket attacks against Lattakia.

An army unit, in cooperation with the popular defense groups, targeted terrorist organizations’ gatherings and dens in Kherbet al-Ghoutha in the southwestern countryside of Sweida province, a military source told SANA on Sunday.
A number of terrorists were killed and their heavy machineguns- equipped vehicles were destroyed in the army operations.

The strikes resulted in the destruction of vehicles equipped with heavy machineguns and ammunition, wounding a number of ISIS terrorists.

Later on the day, the army targeted terrorists in Kherbat Saad and al-Qasr, killing a number of them and destroying their weapons and ammunition.

The strikes resulted in destroying a terrorists’ den with all terrorists inside it in al-Nazihin Camp in Daraa al-Balad.

Terrorists from Jabhat al-Nusra were killed and others injured in army’s strikes in Sahwet al-Qameh village east of Daraa city.

An army unit targeted convoy of vehicles in Daraa al-Mahatta, destroying many of the vehicles and killing a  number of terrorists.

Terrorist organizations acknowledged on their pages on social media sites the death of many of their members, including Naji Mohamed Abu al-Sil, the leader of the so called “Soqour al-Islam Battalion”.

An army unit ambushed a terrorist group belonging to the Islamic State in Iraq and Syria (ISIS) on the road between al-Rahmania and al-Taana to the northeast of Aleppo city.

Field source told SANA that the ambush targeted one of the most dangerous supply routes of ISIS in the northeast of Aleppo countryside, killing dozens of terrorists.

A number of explosive devices, containing C4 substance, were seized by army in addition to many of communication devices.

Later on the day, the army targeted ISIS concentrations and vehicles near the air force academy and to the east of al-Sfeira, killing scores of terrorists and destroying a number of their vehicles.

Army units targeted terrorists’ gatherings in the neighborhoods of Karm Maysar, Qadi Askar and al-Mallah in Aleppo city and killed and injured a number of terrorists and destroyed their weapons and ammunition. 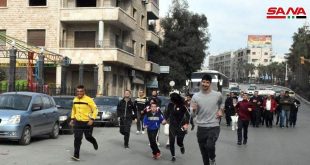