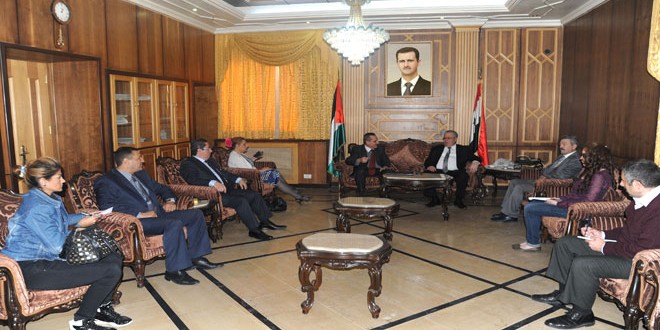 Damascus, SANA- Justice Minister Najm Hamad al- Ahmad affirmed on Sunday that what is happening in Syria is international systematic terrorism supported by external powers, adding that only the Syrians will decide their country’s fate.

During a meeting with Secretary-General of the Arab-American and Islamic Congress, Zakaria Khalaf and his accompanying delegation, the minister pointed out that the meeting comes in the context of communication with the effective powers and organizations in the countries which are involved directly or indirectly in the Takfiri terrorist aggression against Syria to convey the true image of what is happening apart from the image promoted by misleading media outlets.

In turn, Khalaf confirmed that Arab-American and Islamic Congress is constantly following up what is happening in Syria and promoting the real image about aggression waged against it, adding that the Congress is seeking to rally Western and American public opinion to reject aggression against Syria.

The Arab-American and Islamic Congress is an organization which works to unify the expatriates’ work and to build bridges with the Arab and Islamic countries to defend the nation’s issues.

Damascus, SANA- Cold Weather will prevail in Syria as temperatures will drop to become from …