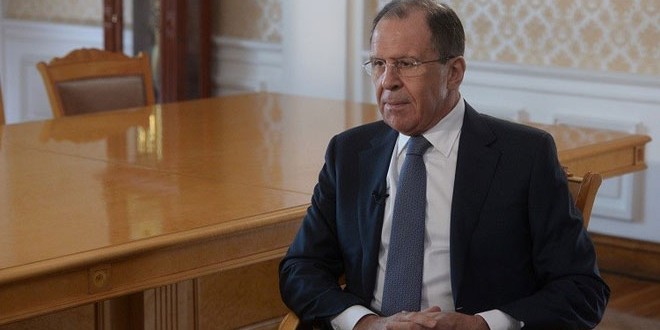 Moscow, SANA – Russian Foreign Minister Sergey Lavrov said that his country’s position towards Syria has always been constructive and in line with international law.

The Russian attitude has always been constructive with regard to the possibilities to reach a settlement to the crisis in Syria, Lavrov told journalists on the sidelines of the three-day annual meeting of the Valdai Discussion Club held in Sochi, Russia.

Lavrov added that Moscow will build on constructive positions during the Saudi, American, Turkish and Russian meeting in Vienna on Friday regarding solving the crisis in Syria, stressing that the Russia has always been constructive about reaching a settlement in Syria.

On Wednesday, Lavrov discussed during a telephone call with his U.S. counterpart John Kerry the preparations for holding a Russian-US-Saudi-Turkish meeting in the Austrian capital Vienna on Friday to discuss reaching a political solution for the crisis in Syria.

On the eve of the meeting which is scheduled to be at the level of Foreign Ministers, Lavrov stressed in a statement to “Russia Today” Channel that Iran’s participation in any external group is necessary to resolve the crisis.

Lavrov added: “In this framework, we are confident that attempts to set up an external support group for the settlement in Syria do not stand a chance without the participation of Iran,” pointing out that other countries in the region should join that group such as Egypt, the UAE, Jordan and others.

Lavrov expected the arrival of representatives of some of these countries to Vienna tomorrow, where they will meet the participants in the quartet meeting within the framework of separate meetings.

Activities of the Valdai Discussion Club lasts for three days in Moscow during which participants will discuss various concepts of war and peace, international relations and economic cooperation between the countries.

Russian renewed call for putting an end to the arms supplies to terrorists in Syria.

Terrorist groups in Syria continue to receive support from abroad, including weapons and gunmen, what hampers the fight against them, an official spokesperson for Russia’s Foreign Ministry said on Thursday.

“We have information that terrorist groups continue receiving support from abroad,” Maria Zakharova said. “It is clear that without this support the victory over terrorists would have been won much earlier.”

Russia “continues to urge all UN member states to submit available data to the UN Security Council on the facts of terrorists’ illegal oil trade and report on measures they are taking,” the Russian Foreign Ministry spokeswoman said.

Zakharova denied reports of a Russian strike on a hospital in Idleb province as “fake”, taking a swipe at the so-called “Syrian Observatory” which is behind the reports, saying that the observatory has a proven record of spreading lies.