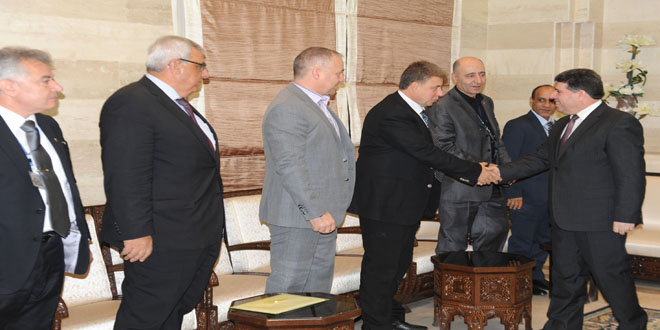 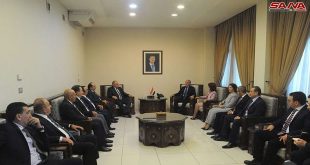 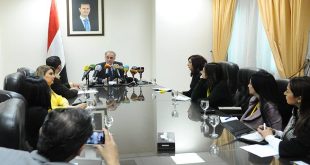 Update-Sousan: Syria is committed only to what was voted on in Sochi Congress

Damascus, SANA – Prime Minister Wael al-Halaqi highlighted on Thursday the important role of the Syrian expatriates in rebuilding Syria side by side with their fellow citizens at home.

During a meeting with the Head of the Syrian Community Association in Russia, Wael Jneid, and the accompanied delegation that is on a visit to Syria, al-Halaqi hailed the role which the Syrian community in Russia has played in contributing to developing the bilateral relations between Damascus and Moscow. He highlighted also the role of the Syrian expatriates in Russian and elsewhere in the world in assisting the people inside Syria and supporting the national economy through sending humanitarian and relief aid and launching campaigns to support the Syrian pound.

The latest of these campaigns was organized few days ago by the visiting delegation at the Central Bank of Syria.

The Premier took the opportunity of the meeting to address an invitation to the Syrian businessmen
living in Russia to contribute to establishing investment projects in Syria.

Presenting a review of the political and economic situation in Syria, al-Halaqi expressed his thanks to the people and leadership of Russia for their continued support since the onset of the crisis in the country in 2011, which has been recently boosted through the Russian Air Force’s involvement in the fight against terrorism on the Syrian soil.

Later on the day, the delegation met Information Minister Omran al- Zoubil-Zoubi who said that the toughest stage in the war on Syria is now over and the next stage will witness shifts in the stances of many countries towards Syria.

Al-Zoubi noted that Syria is pushing ahead with the political track in parallel with confronting terrorism because “Syria can’t accomplish political solutions before eliminating terrorists and achieving stability over all Syrian lands.” The minister pointed out that no country has the right to impose its dominance on Syria or force it to change its constitution and political system.
He hailed the role of national media outlets in conveying the truth of what is happening in Syria and covering the army’s achievements and facing misleading information campaigns.

For their part, the delegation members said that the most important task of the community in Russia is to raise the level of strategic relations with Syria in the fields of media, economy and parliamentary relations.

They revealed that they proposed establishing a joint council to coordinate economic, social and cultural relations with the participation of political and parliamentary figures.