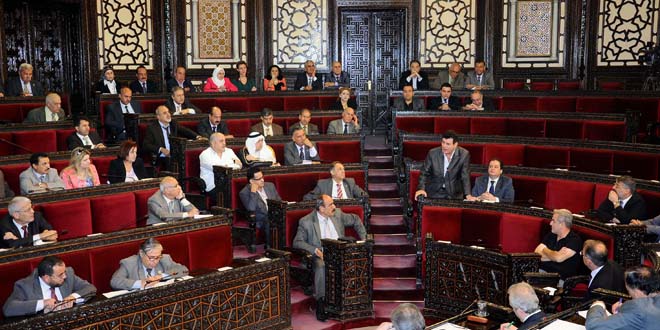 Damascus, SANA – The People’s Assembly on Tuesday discussed the performance of the Public Works Ministry and its preparations for the reconstruction stage.

Discussions during the session focused on the need to adopt the recommendations of the recent reconstruction conference, setting up prefabricated buildings and small and moderate housing areas for displaced people who left their houses due to terrorist acts, and settling infractions for private properties, among other issues.

Responding to the Assembly members’ queries and comments, Minister of Public Works Hussein Arnous said that the ministry’s investment budget for 2016 is set at around SYP 7.9 billion, comparing it to 2013 budget which was between SYP13 and 14 million, adding that the Ministry is working now on rebuilding all its affiliated construction companies.

The Assembly members also discussed the government’s raising the prices of some goods and the citizens’ displeasure due to the price increases, stressing the necessity of handling this issue and for the government to be more in touch with the citizens’ problems and concerns and work to resolve them.