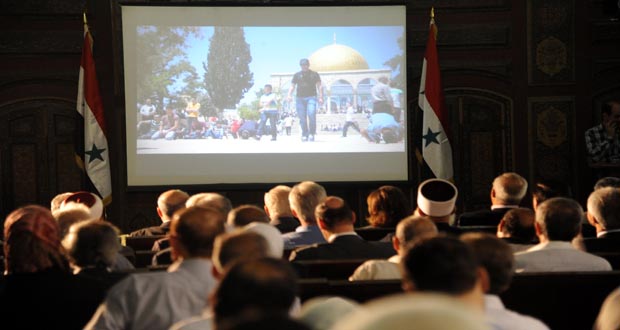 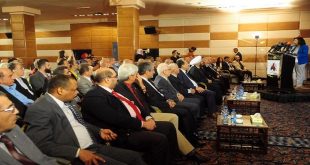 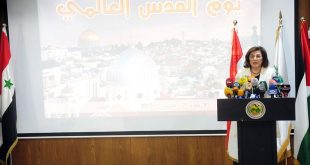 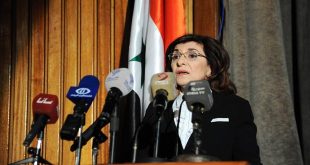 Damascus, SANA – Al-Quds International Foundation held a forum on Thursday at the National Museum in Damascus, marking the 46th anniversary of the 1969 Israeli arson attack against al-Aqsa Mosque.

On Friday, 21 August, an Australian Jew named Denis Michael Rohan set fire to the pulpit of al-Aqsa Mosque in Jerusalem. The attack was triggered by Israeli hatred and racial discrimination against Arabs, Islam and Christianity. The historic minbar (pulpit) Salahuddin was reduced to ashes; indeed, the whole mosque would have been destroyed if it wasn’t for the Muslim and Christian Palestinians who went to Jerusalem from all over the
occupied West Bank to fight the blaze. The participants in the forum stressed that the continued steadfastness in Syria, that has been fighting global terrorism since 2011, renews hope of liberating the Israeli occupied Jerusalem and the whole Palestinian territories.

They called for adopting a solid humanitarian approach based on resistance to fight the Israeli Zionism since the only party benefiting from the current crisis and the bloodshed in some Arab countries is Israel.

A short film, produced by the Foundation, was screened during the Forum. The Film showed photos and scenes of al-Aqsa Mosque and the occupied city of Jerusalem, highlighting the Zionist hostile practices against the Palestinian residents, mainly preventing them from performing prayers at the mosque.

Another film will be screened and a photo exhibition will be held in the course of the forum.

Presidential Political and Media Advisor Dr. Bouthaina Shaaban said the sedition that had started in the Arab world aims at completing the old scheme in fragmenting the region.

Attending the forum on the 46th anniversary of Israeli arson attack against al-Aqsa Mosque, Shaaban said that the arson attack and the similar ones are important to understand the current events in Syria and other Arab countries.

She stressed that the ongoing events in some Arab countries aim at re-playing the scenario which had taken place in Palestine, adding that Syria has managed thanks to its people, army and president and the support of its allies to confront the plot, hoping that the steadfastness of the Syrians will pave the way for a change in power balance in the best interests of the Arab nation.

The Presidential Advisor said that Iran faced the most brutal sanctions and embargo and emerged more powerful in the face of the plot against it, adding that Iran and the Arabs along with Hezbollah are the future of the region, and that all sides that try to separate them by sectarian or ethnic means are actually serving the Zionist interests.

In turn, chairman of the Arab Writers Union Dr. Hussein Juma’a said that the Zionist arson attack was not a simple act but it was committed due to racist culture that kills the human being and despises life.

Fort his part, Assistant Secretary General of the Popular Front for the Liberation of Palestine – General Command Dr. Talal Naji said that there is no difference between the Zionist acts and the acts of the “new Zionists” in Syria, adding that Zionism is the bigger winner from the ongoing events in the region.

Mufti of al-Quds Sheikh Akrama Sabri said in a recorded speech that some Arab countries stood idly by after the Zionist arson attack on al-Aqsa Mosque and only condemned the crime, adding that the Arab are in a state of in-fighting currently that allowed Israel to carry out its schemes in a Palestine.

In a similar message, Greek Orthodox Archbishop of Sebastia, Archbishop Atallah Hanna said that any attack on al-Aqsa Mosque is an attack on all Arabs, Muslims and Christians, adding that “We should all defend Syria because it spared no effort in supporting the Palestinian resistance.”