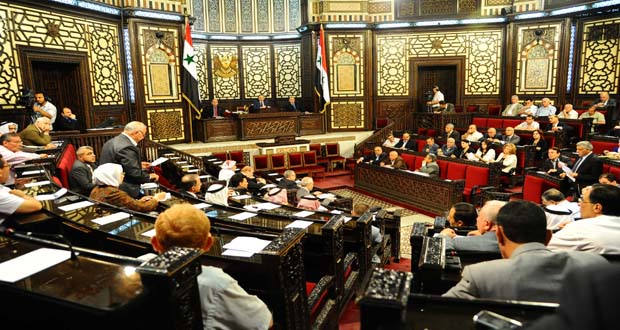 Damascus, SANA – The People’s Assembly on Thursday discussed the performance of the Water Resources Ministry and the water shortages in a number of provinces due to terrorist attacks.

Members of the People’s Assembly inquired particularly about the water situation in Damascus, Damascus Countryside, Daraa, Aleppo and some areas in Homs, stressing the need of providing alternative water sources and setting up emergency plans to deal with repeated water shortages caused by terrorist attacks.

In response to the MPs’ inquires, Minister of Water Resources Kamal al-Sheikha gave a review of the water sources in Syria, pointing out that Syria is suffering from annual water deficit of 1.5 billion cubic meters.

However, he added, the Ministry is preparing a strategy for water projects to bridge the gap between the needs and the water supplies available.

To address this shortage, he said, the Ministry has set up an emergency plan with a cost of SYP 16 billion to supply water to Damascus city that is based on providing water pumps and tankers and digging new wells.

As far as the water situation in Aleppo is concerned, the Minister said the province is suffering from water shortages due to terrorists’ controlling of water sources and water pumps there.

Yet, the General Establishment of Water in Aleppo has set up a plan to define around 180 sites to dig for water, said al-Sheikh, noting that 14 wells have already been dug in the city, while two others are being worked on, in addition to moving 14 desalination plants to be put along Queiq river and 5 others to be places in the public park in the city.

As for the situation in Daraa, the Minister pointed out that 24 wells have been dug in Daraa city and that the Ministry is working on carrying out 10 others in Khirbet Ghazaleh city.

The Ministry, he added, has also drawn up a plan to dig a number of wells in the eastern area of al-Mokharram in the central Homs province that suffers water shortages.