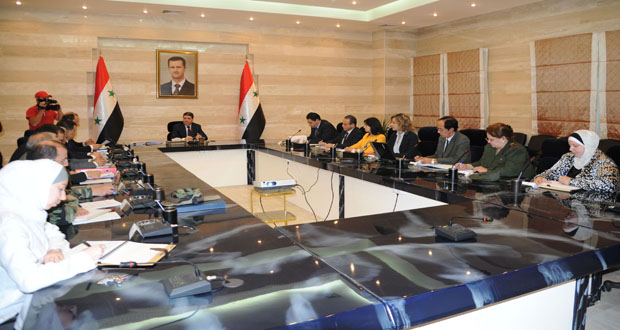 Damascus, SANA – The Cabinet held on Thursday a special meeting to discuss importing medicines in light of a unified mechanism to this effect adopted by the government.

Prime Minister Wael al-Halaqi said such a mechanism would work as “an administrative reform project” with economic dimensions to cut down on both administrative and economic corruption.

This promising mechanism, he said, would help in steering medicinal companies in the right direction away from financial and personal benefit and in controlling the increase in prices and preventing any possible corruption cases.

He added that the unified mechanism of importing medicines would also be useful in rationalizing spending and importing and controlling demand on foreign currency, in addition to breaking medicine monopolies practiced by some privately owned drug stores.

While stressing that the government is bent on combating medicine corruption, al-Halaqi assured that the medicines imported for the health sector are of high quality and credibility.

In this context, the Premier demanded more effective control on health institutions and centers to guarantee their abidance by the rules and regulations of the unified importing protocol.

He called for holding a joint workshop by the ministries of Heath and Higher Education at the General Establishment of Foreign Trade to study and prepare lists of the medicine protocols to include their scientific terms in compliance with the approach followed by the World Health Organization.

The Syrian medicinal industry achieved a remarkable reputation before the terrorist war that has engulfed the country since 2011.

The industry used to cover 93 % of the local market’s needs of 8,000 types of medicines through 72 factories that employed 25,000 workers. Medicines were also being exported to 57 countries.

However, the locally manufactured medicinal products now cover only 89 % of the market’s needs as the health sector and medicinal factories and facilities have been systematically targeted by the terrorist organizations.