Health Ministry: 1456 confirmed infections, 49 fatalities due to Cholera in Syria

The total number of fatalities caused by cholera disease reached 49, among them 40 in Aleppo, 4 in Hasaka, 2 in Deir Ezzor and 1 in Damascus, 1 in Homs and 1 in Hama.

The Ministry called on citizens to follow public health measures and behaviors such as washing hands, drinking water from a safe source, and washing fruits and vegetables well. 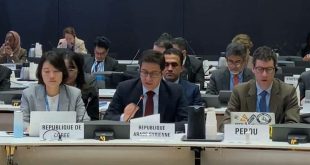