Al-Moallem: Our priority is liberating Idleb from terrorism, no-one in Syria accepts independent or federal entities

Damascus, SANA- The Higher Institute for Languages at Damascus University wrapped up on Tuesday its activities for the first part of “Live Syria 2015” campaign, which included free courses for several languages, by honoring the top students in these courses.

Dean of the Institute Maisa’a al-Syoufi pointed out that providing free language courses bolsters the communicative and social roles of the institute which will continue to organize courses and expand into courses for other languages.

She hailed the efforts exerted by Spanish, Italian, and Armenian teachers who contributed to this campaign for free, asserting the Institute’s keenness to upgrade its cultural and scientific projects with the participation of the universities’ students.

Head of the Languages Department at the Institute Ali al-Lahham clarified that three free courses in Spanish, Italian, and Armenian languages were provided during the activities of the campaign to a total of 90 students, affirming that the institute will open free courses in Aramaic, Japanese, and Persian in the near future. 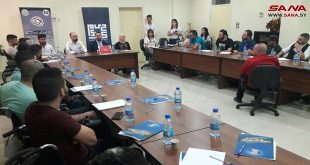